Today is the anniversary of the death of one of my favorite actresses, humans and fashion icons to ever have lived--Jean Seberg. We lived on the same planet for only a few months and I'd like to believe that some of her genius for pulling off an adorable-tomboy-sophisticated-authentic-look somehow wriggled itself into my life despite the oceans and decades between us.

Fact is, I wasn't always so buddy-buddy with personal style. Growing up, I was squarely uncomfortable with the idea of giving more than two minutes thought to any combination of clothes. The notion of wearing a dress or skirt flung me into a panic, not to MENTION the dread that accompanied school picture day (which inevitably required some sort of pattern/color coordination). My mom bought us used clothes from local thrift stores, and to make matters worse, I was so concerned with climbing trees and thinking about what it might be like in other dimensions I had no time to keep up with the current trends of my peers (not that I would have been able to with clothes from "Chocolate Soup"). You get it. NERD!

I somehow believed that style was for girls who had never heard of feminism. You know, feminisim? That thing that means you have to wear clothes that say no to the patriarchy. Being a good little non-conformist teen, I swore off all things fashion, newly-purchased, and "frivolous." I would only adorn myself with existentialist novels, thrift finds, asymmetrical haircuts and disaffected expressions.

My fashion phobia didn't let up until I was 20 and saw one Ms. Jean Seberg in her defining role as Patricia in Godard's Breathless. "NEW YORK HERALD TRIBUNE! NEW YORK HERALD TRIBUNE!" I still randomly call out that line when I'm wandering my house by myself. No reason. It just makes my cats look up in unison.

Welcome to my brain during the above scene:
Oh my god. You mean, you can have short hair and not wear a skirt and still be fashionable and adorable?? THANK CHRIST!

SO LONG, EXISTENTIALIST NOVELS! At least as my only fashion accessory. Here are some facts that I find intriguing, endearing, sad and/or reassuring about our heroine:


1.  Ms. Seberg sprang from humble beginnings in Marshalltown Iowa,
the daughter of an apothecary and a substitute teacher.

2.  Despite her elfin appearance, she suffered from severe depression resulting in multiple suicide attempts. 3. She was unhappily married four times.

4. She was actively involved with multiple left-wing political groups,
not least of all the Black Panther Party. 5. She was subject to constant harassment by the FBI
because of her connections to the Black Panthers. 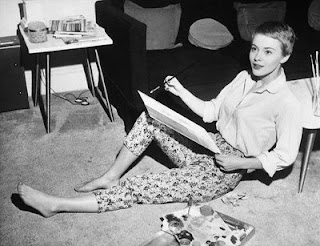 6. Her public influence and left-wing connections so infuriated and panicked J. Edgar Hoover, that he ordered she be "neutralized," instructing the FBI to "leak" a fake letter to the press linking her pregnancy to an extramarital affair with a Black Panther member. The smear campaign reportedly so distressed Seberg that she gave birth prematurely, losing her baby.

7. She supported the school at the Mesquakie reservation near her home in Marshallstown. [correction, courtesy of a friendly reader in the comments below: Meskwaki Settlement near Marshalltown]

8. Though her death was ruled a suicide by French police, there has been a great deal of speculation about whether it was framed as such by the FBI. She was found in her car without the corrective glasses she needed to be able to see in order to drive, and with more alcohol and barbiturates in her system than would allow her to physically be able to drive.
So there you have it. My favorite Seberg facts. There is something endlessly intriguing about the discrepancy between the grace and charm of her outward persona and the inner turmoil, depth of empathy and fierce political resolve that made her the person she was. I can't think of a single young actress alive today who manages to exude the same individuality and spark--today Hollywood churns out boring dolt after boring dolt. One time, though, a girl was born in Iowa, went to Hollywood, and managed to continue to inspire countless throngs of the style-timid 31 years after her death. Thank you for giving me my love of stripes, scoop-neck anything, very short hair, button-up white shirts, giant comfy sweaters, slip-on shoes and short pants. Thanks for being a corn-fed tomboy, turned graceful style icon. And thanks for always looking five, but for having a "fuck the man" heart. Just like me.
Why so awesome, Jean Seberg?
by Michael [von] Braithwaite at 5:42 PM