Do, Dump or Marry?

Obviously I'd marry Grace Jones.  Leather gloves, a fur stole, and what looks like a 44 caliber revolver? This is an outfit appropriate for almost any special event.  The soft luxury of the fur, the sophistication of opera-length gloves, and the contained aggression of the loaded gun are a perfect expression of Jones' persona: serene, regal, and BAD ASS.

His shiny rubber suit is AMAZING, but I'd have to dump Klaus Nomi.  Also, even though Klaus is revered among the art geeks and scenesters who actually know who he is for being ahead of his time and counter-culture, what's funny is that he totally bit that suit idea off of David Bowie after he played SNL with him: 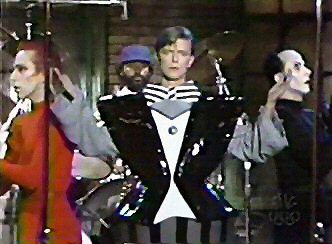 Both suits were made by a guy named Jimmy at the famous New York costume shop Brooks Van Horn. I could have put David Bowie and his superior suit in the mix, but then I'd have a hard time choosing between him and Grace Jones for Marry.

This means I'd do Boy George. Honestly, who wouldn't?  Look at those smoldering eyes!!  I love what he's done with color in this outfit -- bold, warm, complimentary colors remind me of a tropical sunset, and the chambray jacket with beige lining adds a neutrality that reminds me of the ocean and the beach.  Go Boy George. Let's make out ;)


Do, Dump or Marry (homophones - by which I do not mean gay cellular devices):
I would marry Katharine Hepburn.  Even though she was in that hella racist movie African Queen.  Actually, I have never seen African Queen, but the movie was made in 1951 and it is about white people in Africa so....  yeah.  But wouldn't it be great to have her as my permanent date?  Say I write a screenplay and it gets nominated for an Oscar. I'm on the red carpet wearing couture by John Galliano with Katharine Hepburn on my arm!! And Joan Rivers is like, "Damn I thought I was old! Your date is dead. But really, she looks wonderful in that antique tweed pants suit by Muriel King, just wonderful darling, wonderful."
I would do Kat Von D.  Because... well Kat Von D is kind of hot.  She's just so - dirty.  I know how much her boobs sweat in that Agatha Blois custom leather vest. And I like it.  Kat Von D's look is SO L.A.  -- under the vest she's always wearing a bikini top instead of a bra - as if she might have to go to the beach at any moment.  And when she gets there, someone's gonna have to help her put suncreen on all those tattoos so they don't fade.  Someone like Carrie Leilam Love.
I would dump Catherine the Great.  And don't say I made it too easy, just because she is old.  You know who else is old? Michael Douglas.  Donald Trump. Jack Nicholson. Are you getting my drift?  Catherine the Great was one rich, powerful beezy!!  Rich enough to wear gowns made by French dressmakers out of silk brocade from China, wear them with Ermine trimmed robes and more bling than an episode of The Real Housewives of Orange County.  While I am a Taurean with a weakness for material things, I would still dump C-to-the-G.  Because 1. Getting through layers and layers of crinolines and the taught infrastructure of royal 18th century panniers sounds like a pain and 2. She was totally an imperialist and an asshole to poor people.
Do, Dump or Marry (homonymfs homonyms):
This last one is tough.  The Zac Posen gown Tina Fey wore to the 2009 Oscars is exquisite.  A nod to the 40s version of the strong shoulder rather than the 80s version, it's classic hollywood. It's saying, Look, I am not just here to dress up like Sarah Palin and make you laugh, I am a classy actress!  It is also saying, Hey! look at my boobs!  Classy/funny is not an easy combo to pull off, I admire that.
Tina Turner... ok enough of this farce, of course I'm going to marry Tina Turner. I want to ride motorcycles wearing a skimpy chain mail outfit for the rest of my life. I truly do.  Aunty Entity's post apocalyptic look has been iterated quite a bit on runways of late.  Maybe even people who make too much money selling ridiculously priced clothing to other people who make too much money are starting to realize the world is going to shit like the rest of us have known all along... People like the Mulleavey sisters at Rodarte: 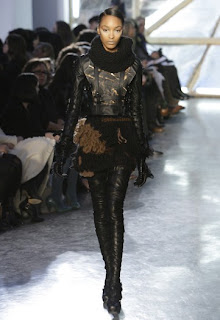 And Christophe Decarnin at Balmain: 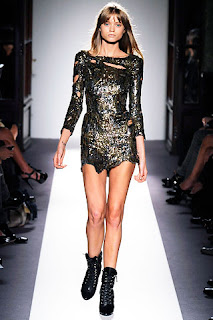 And Marc Jacobs at Louis Vuitton: 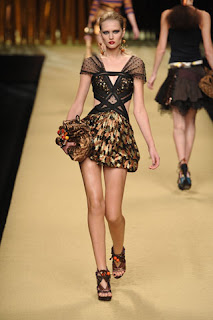 Since I'll be marrying Ms. Turner, that leaves Ms. Fey and Methanphetamines.  Hmmmm.... do Tina Fey? Or do Crystal Meth?  Sexy and Funny or Lots of Energy ALL THE TIME?  I think I'll go with Ms. Fey.  Because I'm pretty sure doing her will not result in losing my teeth and open sores on my face... but maybe I should check with her ex just to be sure...
Love
Carrie
by Carrie Leilam Love at 10:23 PM