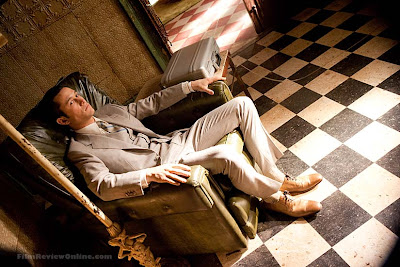 I love Christopher Nolan! I decided, upon seeing his newest mindfuck, Inception, that he is my favorite director working today. The Dark Knight? Genius. Memento? Are you kidding me?! Beyond my enthusiasm for our shared thematic interests (the slipperiness of memory, the dark side of the hero's journey, complexity/the Jungian shadow, the fallacy of linear time), I can now add to my love letter a glittery excitement over his wardrobe styling.

So, if you're one of the ten people left who still haven't seen Inception I won't try to explain it because it is like poetry on film: if you try too hard to find the story, you will end up frustrated by its lack of linearity. Try watching this trailer:


See? That was confusing.
But perhaps you noticed the outfits. Ignore Leonardo--that poor bastard got mad puffy and he's the worst dressed of the lot. However, check out Joseph Gordan-Levitt in the picture at the top of this blog. He rocks a slim, controlled look the whole film that walks a really nice line between nerd and star--which is basically his job as the supporting young buck to puffy Leo. Gordan-Levitt's wardrobe is all three piece suits and--my favorite--when he gets in a pickle he sheds his jacket and kicks ass in his vest and pants. In this scene he does so UPSIDE DOWN. NICE! 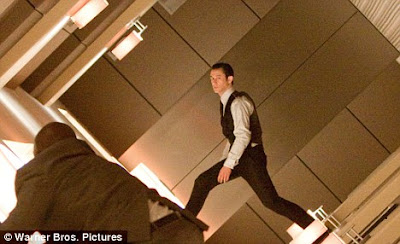 My other favorite men's look in the film was sported by the impossibly dashing Ken Watanabe--who plays an ethically questionable head of corporation who I think we're supposed to forget is corrupt about halfway through the film. Anyway, he looks AWESOME. Check out the patterning and color variation of his tie/vest/shirt: 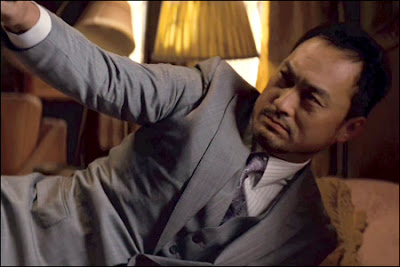 It is like a SYMPHONY up in there. Tailored, perfectly variant subtlety: this is how I would dress all the time if I needed to dress formally all the time. And I had mad cash. It's perfect.
I know I don't often focus on women's fashion but after I read a really snarky piece in New York Magazine referring to Ellen Page's costuming as "asexual chic," I felt I should point out that not all ladies have to have their tata's on display, plus I think Page looks great in her "neckerchief." She's supposed to be a brilliant young graduate student who is roped into a world of psycho corporate espionage. We all know how students dress. Why would she be in a ball gown? 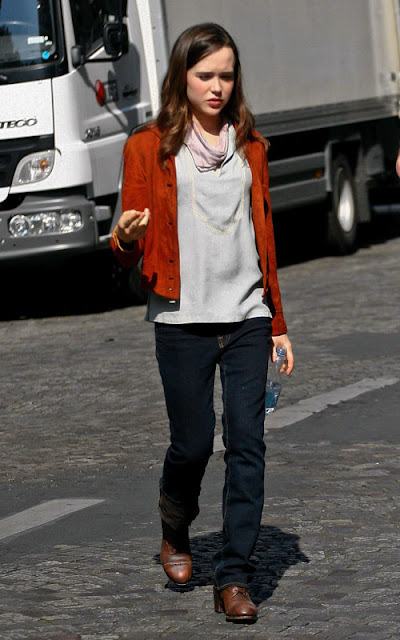 Though I will add that I think that the only character developed at all in this film is Leo's. The women seem to exist to be his ideal or his confidante (Ellen Page). I mean, she could have a sexuality, too, but then a love story would have to ensue because audiences are dumb. Plus who would Leo talk to if not the scrappy young student? Since dudes can't talk to dudes. That's gay.
Ignoring that valid critique and speaking of ideals, though, if you are going to have them in your film perhaps they should always look like the startlingly attractive Marion Cotillard, who plays Leonardo's projection of his dead wife (just go see the movie if you haven't already): 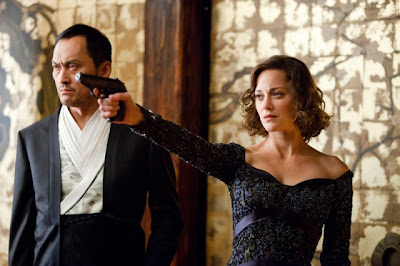 Cotillard's elegant brass remind me of an old French movie. She is my new movie star crush. Though her whole purpose seemed to revolve around pufferfish DiCaprio, she was the most arresting and interesting character on the screen. I wish her backstory had been more developed, which was perhaps the singularly most grating aspect of a great film.
Here she is again, promoting the movie: 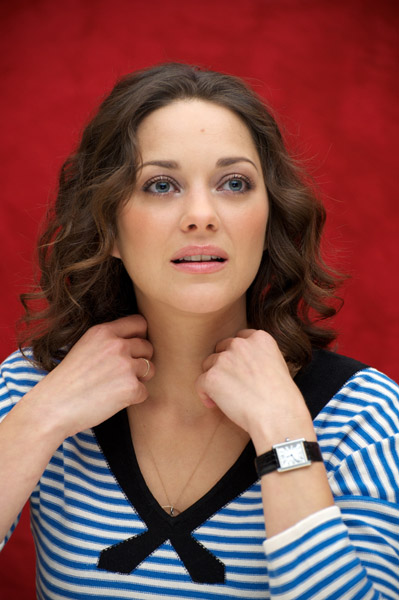 Wow! Forget Megan Fox or whoever the fuck. Check out Ms. Cotillard's watch! And her big eyes! And her understated grace! Swoon.
Even if Inception drives you crazy or you hate it or whatever (a reaction I don't understand but I believe has been known to happen) go see it for the OUTFITS. Much like an episode of Mad Men or any movie made before 1965, this is an aesthetic journey where style and substance co-exist.
by Page McBee at 12:24 PM