A Culture of Sinners and Winners 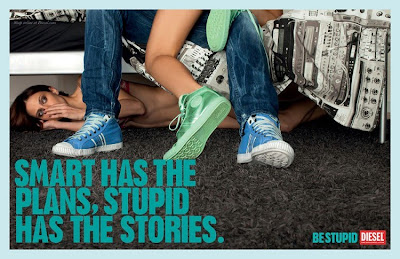 The story of when you witnessed a girl on guy date rape?
I have refrained, throughout the duration of my blogger time here, from hating on anything. Well, maybe not ANYTHING, but given how much noncommittal vitriol I possess for many things, it's been a challenge to keep things filled with sunshine and levity. Maybe that's overdoing it, too. At any rate, I'm about to engage in a cultural rant a-la a style lens. The moral is essentially this: Pick yourself up, America!
SINNERS...
NUMBER ONE: THE RECENT DIESEL AD CAMPAIGN 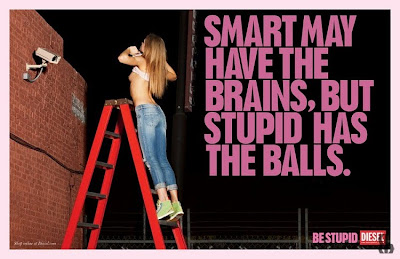 The number one piece of shit, I'd like to knife fight it in an ally, crawl out of my skin with rage when I see it "sinner" goes to the above ad campaign by Diesel. For anyone unfamiliar with this campaign, the story is simple: "Smart Has the Brains, Stupid Has the Balls. Be Stupid." Great! Wonderful! What depth of inspiration! Now maybe it's the bitch with her tits out for the benefit of whoever's on the other side of that security camera, or maybe it's the sheer fact that I've seen this ad every day for the last year during my work commute, but I can't stomach this campaign in the same way I can't stomach Gwen Stefani (I see you , bitch).  Fashion can say a lot about the culture that produces it. It can speak to the wonder, imagination, intelligence and artistry of a culture willing to push the limits, or it can do what Diesel has so bluntly done and speak to the more unsavory truths of our time. It's not just that, though. Ads like these NURTURE the unsavory truths of our time. Americans are increasingly hostile toward knowledge and the message looks a lot like Diesel's "tongue in cheek" ads: Smart = boring, condescending, and its tits are cagey. Stupid = Masculine, courageous, and freedom tits.
Ironically, though, the rash of Diesel dumb-dumb inadvertently undermines Sarah Palin, who was recently flapping her maw about how President Obama doesn't have the balls to protect America's border. The combined Diesel/ Palin logic is as follows: President Obama + No Balls = SMART. Palin and Crew + Nads = STUPID.
Maybe the Diesel ads are a brilliant guerrilla political critique. You be the judge, America.
NUMBER TWO: SKIRTS OVER PANTS 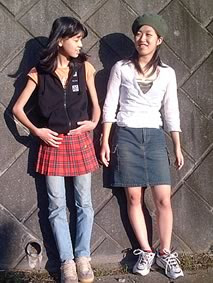 Are you wearing skirts over pants? Don't. I know what you're going to say, "but Michael, skirts have been worn over a variety of pants for years now." Exactly. I've been patiently waiting for the trend to make its exit for well over five years, but I see people wearing a skirt--or god forbid a dress--over jeans and whatnot on a weekly basis. I've begun visibly cringing. The above photo perfectly illustrates what the problem with this look is. There's a skirt, see. And then under that skirt are jeans. So? SO THOSE ARE BOTH INDEPENDENT ITEMS OF CLOTHING. It doesn't look good. It's never looked good. At first glance, maybe she's wearing an apron. But why would someone want to look like they're wearing an apron out on the town? If you want to wear jeans, then wear jeans. If you want to bake, then wear jeans with an apron. If you want to dress up, then wear a skirt or a dress with some tights or leggings. Pants are for pants occasions and skirts are for skirt occasions. You're free to decide what occasions warrant what, but NO occasion warrants both simultaneously. Why? Because it looks like you're indecisive. Life is full of decisions. Pick one.
NUMBER THREE: FASHION DOGS 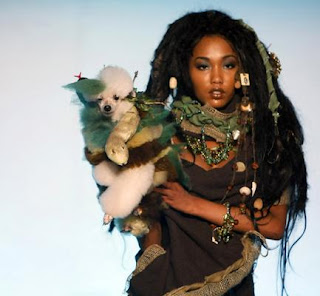 Seriously, Modernity? Come on. That's a dog! How humiliating. That dog has FOUR legs! That's two more legs than is even needed to walk. Enough with the tiny dogs in bags, strollers, or whatever that scenario is above. Any style you might have is instantaneously undermined by the frivolity of a dog in a bag. Let the dog walk. And maybe get those weird stuffed snakes off of it, Beyond Thunderdome. This doesn't bode well for our culture, either. What sort of world do we live in when we're breeding dogs to be too small to not hold.
WINNERS...
NUMBER ONE: LADY BOW TIES 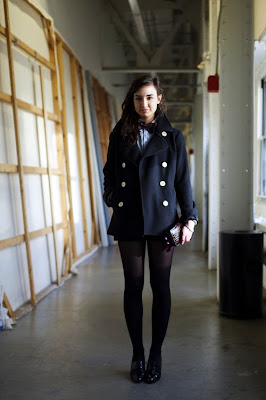 I actually can't wear a bow tie--my hair is too short and my face is too ovular--but it's one of my favorite things that happened this past year in womens wear. It's smart, versatile and unlike the men's version (which requires the right setting to not look like a costume) it's a great way to make an otherwise straightforward preppy outfit look interesting. If you wear a bow tie, you will get crushes. From me. Bow ties make you look like you haven't completely given up on critical thought.
NUMBER TWO: BO DIDDLEY AS FASHION LIFE INSPIRATION
Watch Bo Diddley and the Bo Diddley Ladies do their thing. Think about what that sort of ingenuity, style and talent says about the time in which it was made. Style can illustrate forward thinking, can nurture rebellion and project a quickness of wit and spirit. The trick is to keep it personal.
by Michael [von] Braithwaite at 10:04 PM