Fashion at a Funeral

I have been a little sad this week.  I recently lost my uncle Pret to cancer, and on Sunday I attended his memorial.

I find ritual comforting.  Putting on my finest makes me feel like I am confirming the importance of the passed soul and their impression on my life and the world.  The sober pagentry of a funeral procession is a reminder of the beauty still left in the world after a loved one leaves it, and also of the beauty they inspired while still here.

Funerals are as varied in tone and dress as weddings are, with traditions and expectations varying greatly between and within cultures.  A friend of mine recently attended a memorial that was a dance party at a club, and everyone wore slinky, shiny, night-on-the-town attire.  I have been to a service in a southern black baptist church where everyone wore all black and elaborate hats and cried over the embalmed deceased in an open casket.  I have been to non-denominational nor-cal style "come as you are" services where the attire ranges from mom-jeans and a fleece to dupioni pants-suits, and everyone cries politely in front of an urn while someone plays the harp.

Growing up, most of what I knew about death came from a fascination with 60s political assassinations.


Betty Shabazz chose to cover her head and wear sunglasses, but interestingly, did not wear a veil.  Perhaps it's my projection, but allowing her grief to be witnessed in the form of tears on her un-veiled face seems an appropriate parallel to her husband's style of activism, especially in contrast to Jacqueline and Coretta's choice to filter their grief with chiffon.

These days, we have much fewer high-profile political assassinations (though sadly, with the rise of the Tea Party, I am not sure this will remain true for long).  Politicians do die of natural causes though. 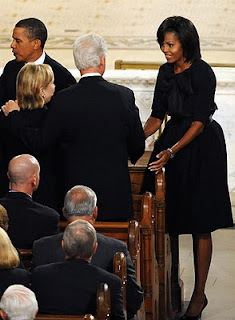 This is Michelle Obama at Senator Edward Kennedy's funeral.  I wouldn't expect a big veil, since that is widow territory, but she is sporting neither gloves nor a hat of any kind! Not to mention she opts for a mid-century circle-skirt look over a suit or anything tailored. How modern!

Modern funeral dressing may be unexpected at a Senator's funeral, but it's a matter of course when a star from the design world passes into the twinkling abyss.  At the 2008 funeral of Yves Saint Lauren, guests honored the departed icon with a fantastic array of personal style choices:


Gautier, at 56, was working the "bad boy cleans up good" look.  It's remarkable how his crisp white shirt cuffs are peeking from under the sleeves of his motorcycle jacket just as if it were a blazer. I'm sure that isn't an accident.


John Galliano constantly defies categorization and his outfit at Saint Lauren's funeral is no exception.  I will say that where Gautier went for non-traditional in the outerwear and traditional in the innerwear, Galliano has done the reverse, wearing a conservative blazer over a low-cut shirt with jeans and a pair of mottled grey and white oxfords I wish were more in focus because they look amazing.

More recently, the fashion world lost Alexander McQueen to suicide.  I am not ashamed to say I cried. That man consistently taught us where to find beauty in the grotesque.  He had the imagination of a precocious child, one worldly enough to be filled with sophisticated ideas and innocent enough to find magic in the bizarre.


Lady Ga Ga, who's beautiful-monster brand of extreme fashion was a perfect match for McQueen, wore this avant-garde experiment in texture and proportion to McQueen's funeral. The enormous synthetic cape makes it look as if she's just parachuted in from outerspace, wearing a hat that would fit in at an Edwardian horse race and shoes that look like they came from a Bretón painting. 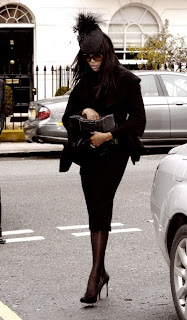 I might have expected to find Naomi Campell's very conservative tailored look while browsing through photos of Dr. King's funeral!  But this is what she wore to send McQueen off to be with his mother in the promised land.  In this instance, she is the anti-Ga Ga: the proportions of the dainty hat, dainty heel, slim tailored coat and just-below-the-knee hemline of her pencil skirt put the CLASS in classic. 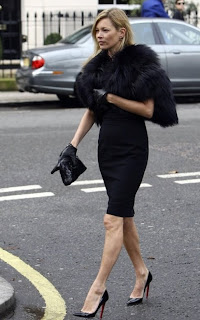 Kate Moss' look wasn't very interesting overall, but the fur capelet kind of amazed me. It's very difficult to make a fur garment that has any sort of distinguishable line to it, because fur is soft and fluffy and blurs the cut.  This capelet has a very distinctive shape with readable lines, even more remarkable considering the long hair of the fur in question.

Alexander McQueen is one of very few public figures that I have mourned, among them Luther Vandross and Aaliyah.  But without a doubt, the only public figure that I have grieved extensively, that I still grieve even a year after his passing, is Michael Jackson.   At least once a week, I cry because Michael Jackson is dead.  Laugh if you want to, but I'm serious bout my Mike. 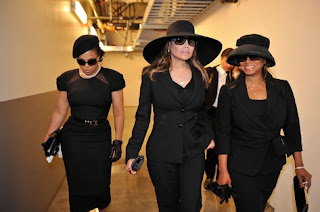 I tried desperately and unsuccessfully to get a ticket to Michael's memorial at the Staples Center, from which his sisters Janet, LaToya and Rebbie are seen exiting in the above photo.  Latoya and Rebbie's looks are classy and respectable.  Youngest sister Janet however adds fashion-forward to that list of attributes with her strong-shoulder geometric cut-out blouse, leather half-gloves and asymmetrically styled beret.

As for my Uncle Pret, he was the epitome of Black American masculine style for his generation. He wore crisp suits, silk ties with matching pocket squares, and hard shiny shoes. He was never without his gold watch, gold ring, and gold chain.  I wish I had a picture I could show you. This is what I wore to tell him goodbye: 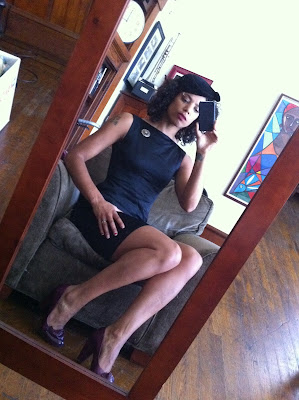 The dress was a gift from my wife and is from Banana Republic. The broach and hat are both vintage, from China Town Salvation Army and a new nameless vintage store in West Oakland respectively. The shoes are Chi Mihara.  Sad expression courtesy of James Edward Pretlow 1938 - 2010.  I hope he thought I was sharp enough for his homegoing celebration.