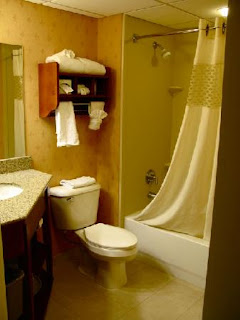 So listen, I'm playing some terrible sort of international email interview-tag with the editor of my favorite new fashion magazine, I Like My Style, Eva Munz, finding out what magnificent planet birthed her and how she survived her space travel and arrive on planet earth looking so good, and I thought I'd have it by now but I don't, and I tend to not have Plan Bs, just as a rule, in general, as a life philosophy. Oh noooooo, what will I blog about? I thought as I rolled my hideous, over-designed Betseyville carry-on with the lips and the 'hottie!' and the trash-baggy ruffles and the lightning bolt zipper pulls into my room at The Hampton Inn in Santa Clarita , California (see bathroom above). I'm teaching a novel workshop at CalArts all fall, so I'll be spending a lot of time at this particular Hampton Inn, which is just great because not only do the nice ladies who work there set out a little paper plate of Vienna sausages impaled on toothpicks, and cheese on toothpicks too, and a giant bowl of microwave popcorn optimistically sprinkled with herbs and cracked pepper, not only does the joint have a big outdoor pool and jacuzzi, but the flat-screen in my room carries FASHION TV! And so I got to kick back with some chums and watch three episodes, just footage from the Paris shows this winter, in which waaaay oversized outerwear was a major theme. In addition to the runway there were a lot of shots of the crowds before the show and after, streaming out of the buildings bundled against the French cold, on their cell phones. Occasionally a French actress would be invited to say something totally obvious ("Karl Lagerfeld . . . is a genius), but mostly these shots just lingered on a bunch of who-knows-who-they-are, and were both boring and fascinating. I found myself wanting to see that more than the shows in many cases, cause I didn't much love the collections. Hearing Nina Garcia and others gush about how brilliant Gaultier's show was made me wonder, as I have many times during this season's Project Runway, if her taste has gotten so bad she is officially an aesthetic hazard. Gaultier's models were as overdone as my Betseyville baggage, wearing, like, a Chinese dress and an Eastern European folk jacket and an African turban all at once, with really bad neon tights and big 90s shows. It was like a bunch of feral children playing dress-up with a severely multicultural costume box. God, we've gone so long without a photo, let me find one - 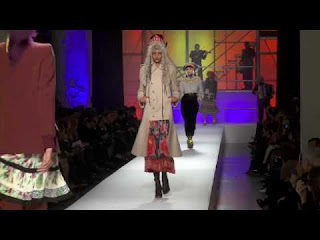 I do tend to really love Gaultier's winter coats, and I think it's cool that he's doing this weird thing where the coat is short in the front and long in the back - a mullet coat! I dig it. I also dig this crazy hat: 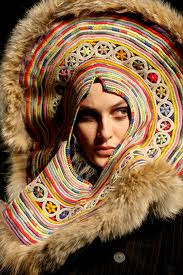 It's like one of those moments when you're pulling a sweater over your head and you get sort of tangled and you're wrestling with it and you catch a glimpse of yourself in the mirror and think, Why, I look gorgeous! And you regret not being able to go out into the world with your head all wrapped in your sweater like Little Edie. Thanks, J-PG! Also, I just learned that Beth Ditto will walk in his Fall-Winter 2011 show this winter! So super excellent.

Okay let's move on. Viktor & Rolf's show was amazing theater: set up like a weird factory with a backdrop of gears, models in black underwear walked out to be dressed on stage by Viktor and Rolf, who peeled garments off overdressed model Kristen McMenamy, who continues to be so awesome. She looked crazy and Klaus Nomi-esque, standing blank like a good mannequin, spinning on a rotating part of the stage while the designers dressed the girl that just came down their conveyor belt - er, runway. Look! 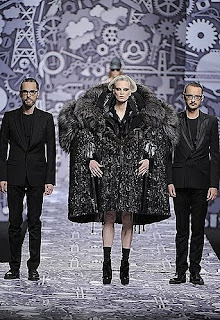 And check out the magnificent grand finale: 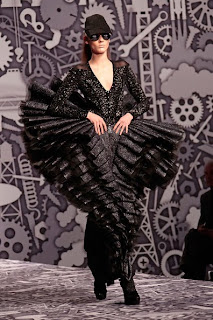 WHAT? I love the volume these guys create. Everything is so big and crunchy! I only wish that they hadn't felt it necessary to style the models like 90s leather fags from the neck up.

Okay, my flight is boarding, so I've got to cut this short! Some final thoughts: Cacharel was pretty good, sort of goth but maybe it was all the Joy Division. I really liked the models' hair: 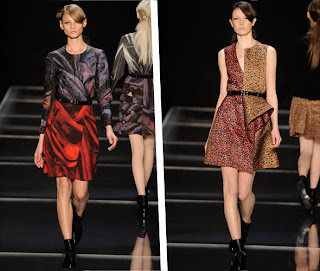 Bangs over one side of the face, and a messy, tight French braid in the back sort of exploding.

Speaking of hair, at Hermes Jean-Paul Gaultier styled the models with tight, low ponytails you couldn't see from the front, so they looked all manly coming toward you, and then all ponytailed-out on the exit. It was all menswear, too, with bowler hats, so it really worked. 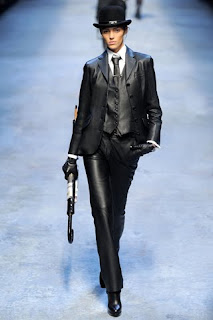 Secret ponytail. You'll have to trust me.