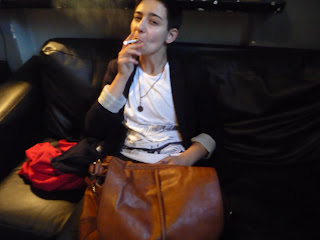 Czesc from Warsaw, my ancestral homeland where I am currently in residence, with a chest cold, smoking. Nothing makes you understand you are addicted to cigarettes like smoking with a chest cold, but here in Warsaw people are always smoking, so it's like you're smoking even if you're not smoking, so why not smoke, right? Above is my friend Anu, who is a poet and smoker of cigarettes, and stylish as well. 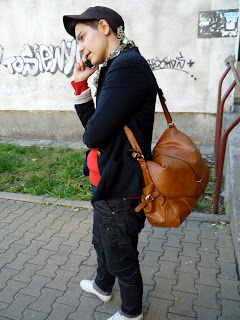 Anu's mom managed the first Chanel boutique after communism went kaput in Poland. "During communism you couldn't do your own fashion business. You couldn't buy your own clothes. You couldn't buy toilet paper. It was very hard. Then, all this fashion appeared in one moment. My mother ran Chanel, and she ran Escada. She's so beautiful. She's, like, hyper-feminine." If I wasn't about to book it out of this country I'd make Anu take me to meet his hyper-feminine mother, who has a room in her home that is a library of Vogue magazines. She likes to buy hyper-feminine clothes for Anu that Anu then gives away to his hyper-feminine friends. Hey Anu, I'm, like, right here! Pass me some goods! 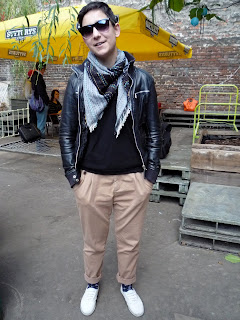 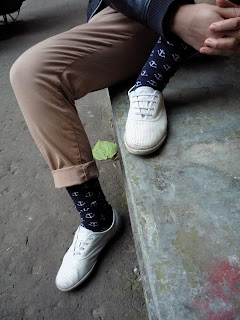 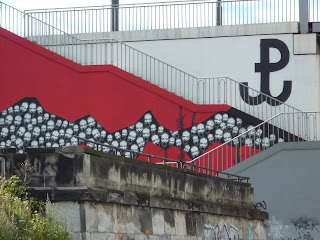 Poland was the only European country that did not collaborate with the nazis. Way to go, my people! This mural by the river Vistula commemorates the Warsaw Uprising, when the people of Warsaw, without any help from the allies or Russia, fought the nazis off for 63 days. Eventually they were overpowered by the Germans, who then burned most all the city to the ground. Warsaw was later rebuilt by the Russians, and so the city has a stark, minimalist, Soviet look to it. Some buildings have cool bas-reliefs of workers working, but much of it looks like spiffed-up American housing projects. The Praga neighborood was spared from total destruction and contains lots of old, crumbling brick buildings marked with bullet holes from the war. 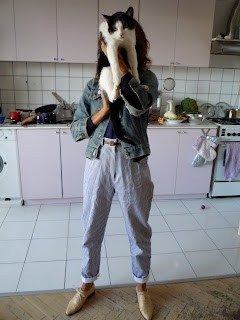 I bought these pants for 17 zloty. Everyone has explained the zloty to me by converting it into Euros, so then I have to convert the supposed Euro into dollars, so in the end I'm not sure how much these pants cost, but I was assured they were cheap. And cute! I got them at a second hand store, of which there are many all over Warsaw. This cat is named Krowa, which means cow. 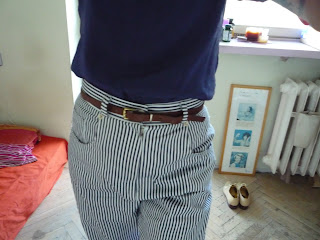 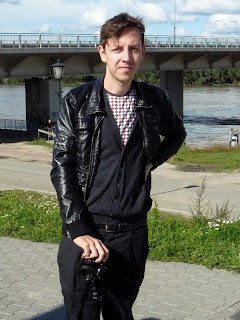 This is Slawomir, a poet and photographer. We went to the river to take photos of a statue of the mermaid Syrena, Warsaw's ancient protector who is said to live in the waters and is featured on the city seal. We encountered another photo shoot: 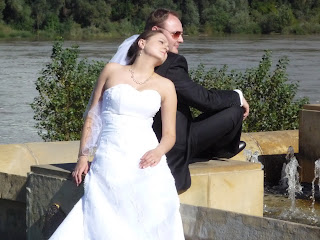 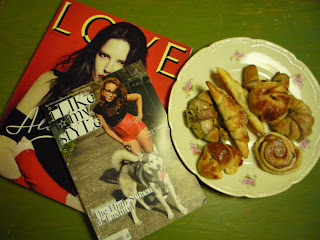 Still Life with European Fashion Magazines and Polish Pastries
Love magazine is out of London and Issue#4 features interviews with Isabel Marant, Lauren Hutton and Agyness Deyn. I Like My Style is out of Berlin and is my new favorite, more of a zine than a regular fashion rag. Issue #2 has editorials of people trying on fancy clothes in dressing rooms and taking photos of themselveson the sly, plus interesting ladies modeling their own awesome wardrobes. I'll have an interview with the editor, Eva Munz, up here next week! 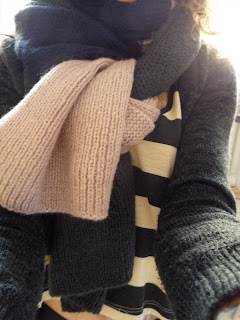 Upon arriving in Warsaw I learned that my luggage full of BEACH CLOTHES would not really help me out in the freezing rain. I tried to buy a winter coat at H+M, but everything was either ugly or a replica of coats I already have back at home. But all my nice Polish comrades were very concerned about me having a suitcase full of bathing suits, shorts and tank tops, so I bought this scarf. It is amazing what a giant scarf can do to keep you warm. Now, let's hit the streets! 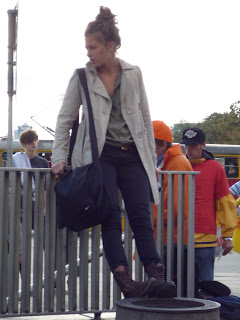 A Polish lass looking excellent hanging out on a trash can in the city center. 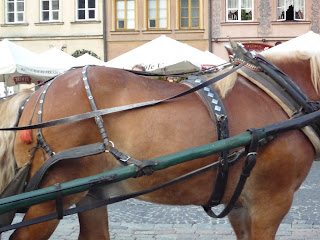 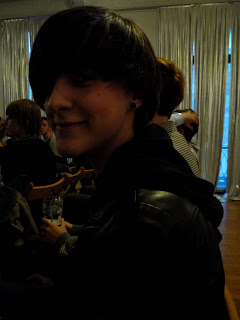 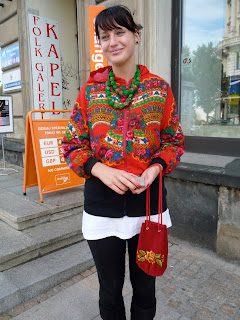 I loved this girl's colorful jacket and her cool necklace, but she was sort of embarrassed when I asked to photograph her, because she actually works for a Polish Folk Art Gallery and has to stand on the street in this traditional outfit to lure people inside. Whatever, she still looks cute! 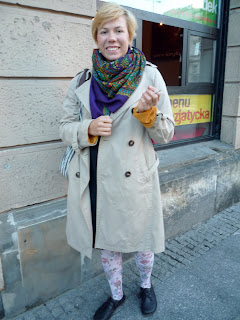 This is Marta, the most cheerful girl in all of Poland. She is from Warsaw but studies in London, so her folksy Polish scarf and classic British trench is perfect. 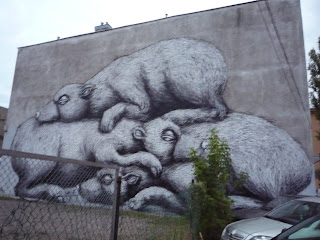 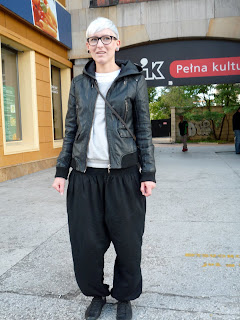 This person is a hairdresser who also works as a stylist for a Polish fashion magazine. Let's get a close-up of that hairdo: 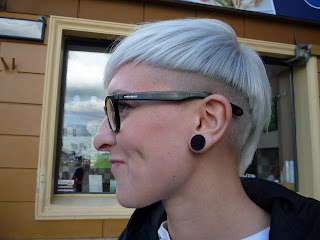 I spent much of the 80s trying to get my hair that shade of silver. It's not easy! Well done. 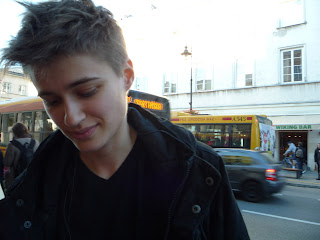 I'm opposed to posting photos of people on a fashion blog simply because they're attractive, but I'm making an exception for this person. Pop star Doda, 'the Polish Lady Gaga', put her on her album cover: 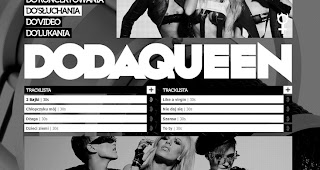 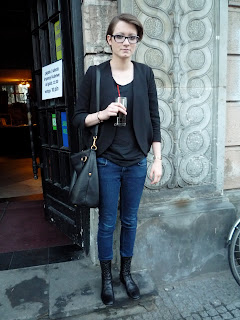 The bag is Prada. Not that that matters. 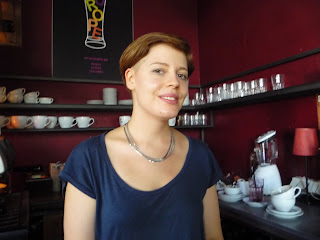 In case you haven't noticed, half the girls in Warsaw are sporting short hairdos with shaved bits above their ears, making the city appear to be much, much more lesbian than it actually is. I liked the look of this barrista at Czuly Barbarzynca (The Tender Barbarian), a super great bookstore-cafe with a velvet swing hanging from the ceiling! 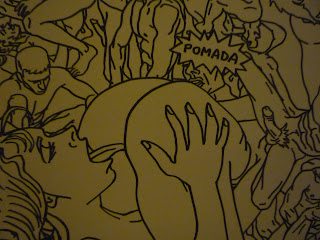 A poster for Pomada, the queer festival that was the alternative to Europride in Warsaw, 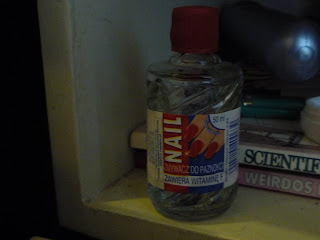 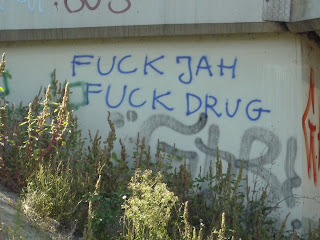 Graffiti by the river, 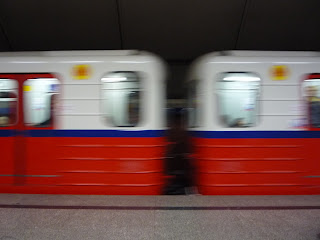 And the Warsaw Metro. Do widzenia!