When I was a kid, I was obsessed with the seventies. I was a hippie for Halloween three years in a row. It was supposed to be fun, as opposed to scary -- although as an adult I do actually find hippies a little scary. I'm always worried they might hug me without permission. That said, if you are born and bred in NorCal as I am, there is no escaping a little inner hippie -- more on that later.

Besides the idea of peace and love and never having a job, I was also obsessed with the Black Power movement of the seventies. After all, the Black Panthers were started right in my home town of Oakland, CA. Although the Panthers were fighting to get jobs instead of avoiding ever having them, I was equally supportive of the unfinished agendas of these two seventies counter-culture groups.

To this day, I continue to work towards the completion of those agendas, through activism, through art, and most relevantly to the current forum: through fashion.

And I ain't talkin bout that Babyface song, although I could sing every word of it to this car and mean it: 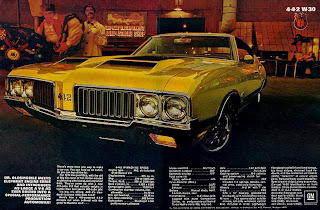 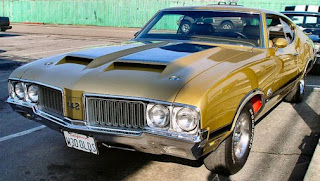 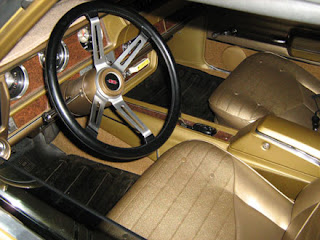 Sometimes when life sucks, I imagine myself driving a gold and black 1970 Oldsmobile 442 W-30, listening to the BeeGees on my way to a Black Panther rally. (I must have absorbed Oldsmobile's old tag line escape from the ordinary in the womb).

And if you want to know what I might be wearing as I drive the hottest car ever made on my way to participate in a courageous act of collective resistance (while listening to the most soulful white boys ever to live -- yeah Hall & Oats I said it... what?) here it goes:

Irregular Choice made the ill pair of red leather beaded and embroidered pumps below, and that's just one reason IC is my favorite brand of shoes EVAR. Dan Sullivan, creative director at IC is not a shoe designer, he is an avant-garde sculptor who makes art you wear. If you really wanna know, check out the archive of designs from past seasons. Sullivan named this pair cutlass. He means a pirate's sword in reference to the skull and cross bones, but a Cutlass is also an Oldsmobile. And the rake of the heel on these shoes makes them look fast -- Dr. Oldsmobile would definitely approve.

The IC pair below is called cut that! The perforated leather heel echoes a vintage steering wheel. Muscle car appropriate if ever a shoe was. 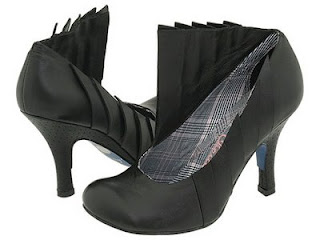 As I have been saying for years, acrylic heels are NOT just for strippers. Why should they get to have all the fun? Of course, this sick sick pair of boots by Marc Jacobs was marketed as having a "lucite" heel -- but we know what the deal is. 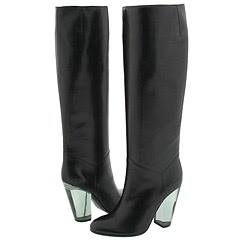 This shoe by Georgina Goodman is a little matchy-matchy for the car. But I would forgive myself. 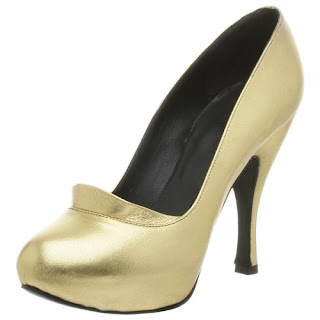 I fell in love with this pair of motorcycle jeans by Pratt Denim when I saw Rihanna in the lighter-wash version. 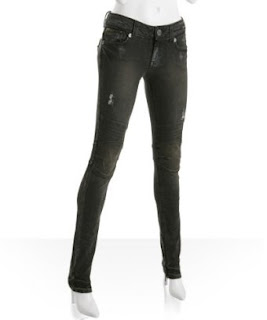 I think it would be impossible to put together a seventies inspired fit without something from American Apparel. Creepy sexploitive ads be damned, these fools are genius at re-creating basic cuts from the seventies and eighties and they've built an empire on it. 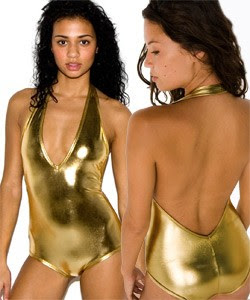 I would also definitely rock it with layers of dukey chains, like this fine stylist on lookbook.nu. The embed feature on lookbook.nu is crap which is why you have to click the link instead of being able to see the very shiny model in a very shiny bodysuit with her neck dripping in the blingiest assemblage of fat chains and gold pearls ever.
Technically this is a look that came out of black urban culture in the eighties -- the explosion of cash due to the crack epidemic birthed the ostentatious zeitgeist of the $100k rope chain, and hip-hop made it iconic -- but I'd like to think that seventies Carrie would be ahead of her time.
Speaking of iconic, as Huey Newton demonstrates in this photograph, item #1 of the official Panther Party uniform is a leather jacket with lapels, item #2 is a black beret. 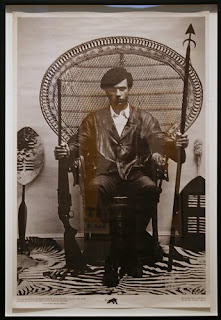 In my day-dream, I wear this jacket: 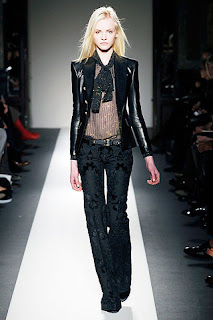 ...because just like a lot of people in the fashion world I AM OBSESSED WITH BALMAIN. Christophe Decarnin's Spring 2009 collection was a celebrity favorite and is responsible for the short-skirt-strong-shoulder cocktail dress mayhem that has taken over every runway, red carpet, senior prom, and date-night since. I don't care if every teenager with enough cash for a trip to Forever 21 has a knock-off, I still love this shit. The jacket above is from the Fall 2010 collection and is definitely sharp enough (you could cut a bitch with those lapels!) for a Panther rally.
As for the beret, Gautier made some for his Black Panther-inspired fall 2009 collection, which I am going to include pics of just on GP: 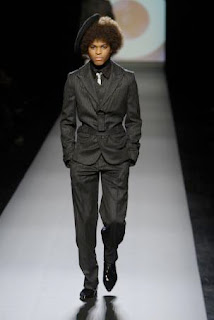 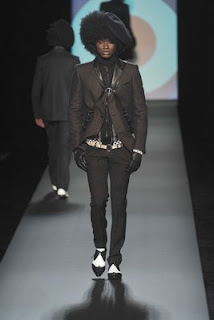 ...but I would be happy with this one available on buy.com for five bucks. It's a beret, for chrissake.

Item #1 of the UNofficial Panther Party uniform is wayfarer sunglasses. Bergdorf's has a pair that go for twice my monthly car payment, (but boy are they slick) or you can get the pair pictured below for a still ridiculous but less outrageous $130 or so at various retailers. I got my pair at a gas station in Paso Robles for $5 and I'm happy about it. 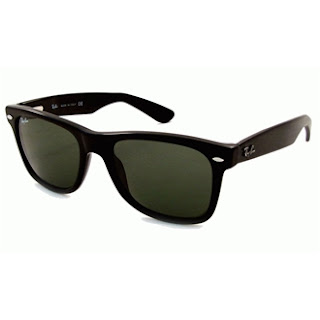 Ok, now you're probably wondering where the hippie part comes in. It comes in right here. Cross pollination among sub-cultures (not to be confused with appropriation) is a fantastic tradition and one that my fantastic seventies alter-ego would surely partake in. Just as seventies Carrie might not be about "dropping out" but is all about being "far out," she might reject a peasant blouse and armpit hair but would definitely rock this: 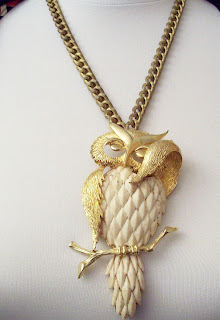 My real life 2010 self actually owns this remarkable piece of jewelery designed by Luke Razza in the seventies. When I saw it in the case at the now defunct Dolled Up Vintage in Berkeley, I thought to myself: It's a little bit hip-hop, a little bit hippie -- just like me!! And I copped it on the spot.
Top off the accessories with these hoops inspired by traditional earrings of the Fulani people of West Africa and you have a Black-is-Beautiful ensemble worthy of the baddest whip in town. 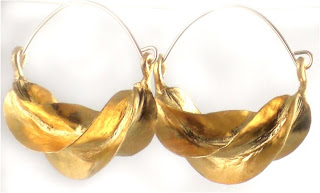 Now, before you go telling people I'm cheapening what the Panther's stood for by making a rally into my own personal Catwalk, remember that image and visibility was a big part of the Panthers' strategic plan. The jacket and beret weren't just meant to unify appearance, they were meant to be bad-ass. They were meant to appeal to young people's sense of cool and rebellion. I will be the first to admit that spending $10k on a Balmain jacket is counterrevolutionary (good thing I will likely never have enough dough to even face that temptation). But it ain't nothin wrong with looking good while you do good!!
I hope you've enjoyed your ride on the passenger side in my gold-leather bucket seat. Thanks for not fucking with the radio.
I also hope that Huey is reading this blog in heaven and thinking I'd like to retro-actively instate Carrie Leilam Love as chief aesthetic image officer for the Panther Party.
Black Power.