Iceland Opens its Closets and WOW! 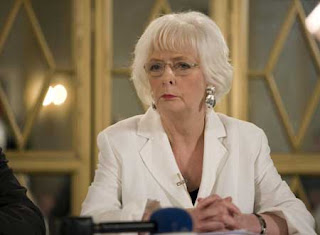 Get it? It's a fashion blog and Iceland opened its closets. You loved it, don't lie.

If you don't already know, Iceland legalized same-sex marriage this week and its openly gay Prime Minister, Johanna Sigurdardottir, 78, promptly married her partner. For those of us who might be counting, that's one more satisfying lifestyle point for a foreign country, amid any number of life satisfaction backslides for the US (I'm looking at you, Arizona and Hawaii). Thus concludes the portion of this post where I wax political.

I don't want to be lumped in with the media masses that so often focus on a female politician's aesthetics rather than her politics, but let's face it, I don't know enough (which is to say anything) about Icelandic politics to have an in-depth analysis. So on that note...

Johanna has some really great shit going on in her closet! When I'm 78 years old and ruling some quirky little country that still believes in some sort of magical being (other than god) I want to look like this: 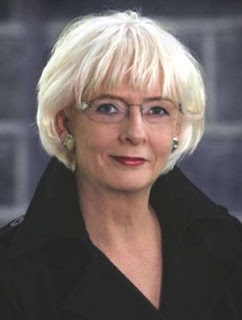 Johanna to world:
"Oh I'm sorry. I'm just looking like an artsy go getter who doesn't fuck around about the issues."

Do you know of a single American politician who wears a cream toggle coat when addressing the press? I don't, and I think that's why America is having trouble competing on global issues. 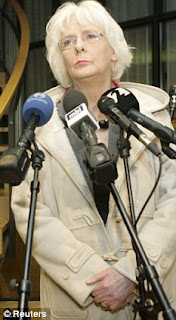 Let's be for real. Everyone was so excited about Sarah Palin's glasses that Tina Fey already invented, but Palin looked like a version of "dress your overly-entitled, very unprepared child up for professional daughters in the office day." That's not fashion, that's a long credit line at Macy's. When's the last time Macy's did anything for anyone?

What's great about Johanna is that she always has great little touches, fun details that give her a personality that jumps off of the page (that toggle coat, the sleek black jacket with a popped collar, the adult Dorothy Hammill haircut that Karen O WISHED she wore as well, the monochromatic outfit designed around a necklace made of straight up ROCKS). 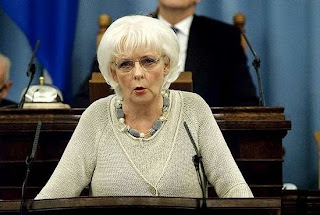 Johanna to some form of government:
"When I address whatever sort of government we have
here in Iceland, I wear rocks so that you know I'm for real." 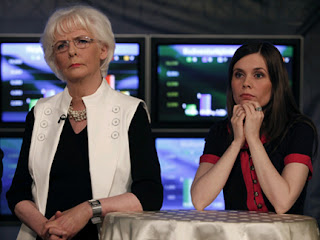 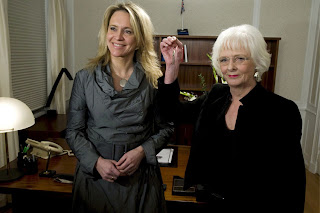 Apparently everyone in Iceland considers what they look like
before they leave the house.

This is what it looks like to age gracefully, folks. It's quickly becoming a lost art in an America too-often obsessed with a youth culture that (and correct me if I'm imagining this) is getting tackier by the decade. I don't want to tell you what to do, but since I want to tell you what to do--if you're squarely an adult, past 30, then you could stand to stop reading all those magazines that focus on abs, blow jobs, and hairstyles best suited for 20 year old sorority girls and look to Johanna Sigurdardottir, former flight attendant, current Prime Minister of Iceland for life and fashion inspiration in the coming decades.

This is real talk.