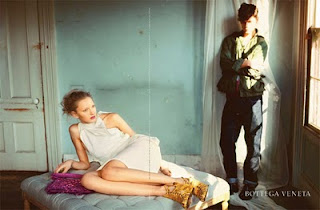 Hey! Nan Goldin took that picture! Probably a bunch of you already knew that, and I say to you, don't come here for breaking news, okay? I'm the last to know almost everything, but I promise I'll get more obsessed with it than anyone else. That's what I have to offer.

I'm blogging from Akumal, Mexico, where every summer my literary non-profit, RADAR Productions, takes a bunch of writers with the hope that the structured writing hours, lack of cellular telephone and general stranded-on-a-tropical-island vibe will help them get a little closer to finishing their books. The 'stranded' vibe seems more intense this year - I've barely had internet since I got here, and have no idea if this post will actually post. Last night we lost electricity completely and ate huevos rancheros by candlelight, then fixed fried plantain sundaes with flashlights held in the crook of our necks. As the condo got warmer and darker, palmetto bugs joined us. There was a lot of screaming. 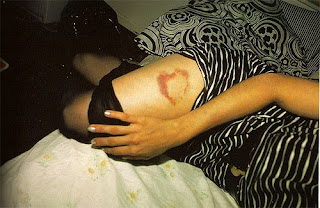 My big plan was to blog about these purses and jewelry at this really cute little store in the village, but the folks working there wouldn't let me take pictures. I'll keep nagging them about it, don't you worry. Temporarily defeated, I walked over to Akumal Bay, which was jamming, spread my Jeremy Scott as an Adidas-clad angel beachtowel in the sand and read the copy of W I grabbed at the airport. W makes Vogue look like frigging Nylon, know what I mean? Amidst the articles about Seoul being the new plastic surgery vacation destination and Fresh's barfelonious new line of perfumes based on that Eat, Pray, Love book is an interview with Tomas Maier of Bottega Veneta about his decision to turn all the brand's print advertising over to fine-art photographers. Nan Goldin, my favorite, shot the Spring/Summer 2010 ads in a crumbling mansion on Staten Island. That photo above is her Heart-Shaped Bruise, and I want a tattoo of it on my own thigh. Right? 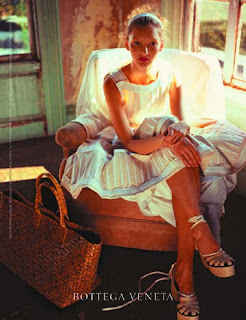 In the article Nan reveals that she was bummed at having to work with the model, because she doesn't like blondes. What a crank! When I spied her backstage at Stella McCartney during Paris Fashion Week that one time I got to go that I'll never shut up about, I ran over to her while she was getting interviewed by an Italian journalist. "What do you think of Paris Fashion Week?" the man asked. "Yes," she replied. I tried to become her groupie/hanger-on, but she shook me, dashing into the child-care room Stella had backstage. At least I think it was a child-care room. There were more strollers backstage at Stella McCartney than models. 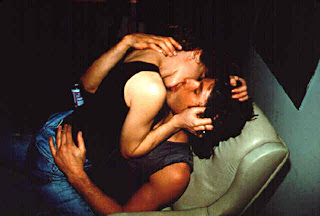 Is this the hottest photo ever taken? Yes, it is. There is nothing more to say about it. Instead I will share with you that it is so hot in Akumal, one ceases to care about fashion. I've spent my days writing in a damp bathing suit, beginning to worry that my hair looks like shit and then thinking, Aw, who cares, anyway? A lady could really let herself go in a place like this. 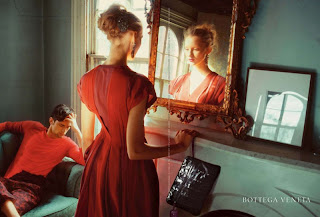 Well, it appears that the internet will not allow me to post the final Nan Goldin photo I wanted to share, one of her non-commissioned pieces, that like almost all her work references the glow and crash of sexual obsession, bedrooms where something intense just went down, people seeming hungover or worse, everything frenzied or exhausted from a recent frenzy, the specter of pending violence or it's brutal confirmation. I think if I don't post this now it might never happen, so here I go. But before I do, shame on those bad Mulleavy sisters for basing their recent collection on some fashionified (like Disney-fied, only waaaaaay worse) idea of female Mexican factory workers getting murdered on their way to work at 4am (to make Rodarte pieces for pesos a pop, no doubt)! This is exactly the kind of dumb, checked-out shit that makes smart people hate fashion, thanks a lot, jerks! For the whole story check out the great article Lindsay Beyerstein wrote for In These Times. The line falls somewhere between Alexander McQueen's Highland Rape line and the season Costume National based their collection on transsexual truck-stop prostitutes after reading JT Leroy. What I would like to see is some brilliant genius base a collection on Nan Goldin's photos. Get on it, Jacobs!
by Michelle Tea at 3:33 PM