Patrick Mohr Blows the Internet's Mind. AKA, Get Over It! 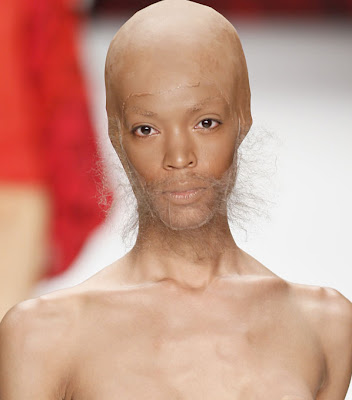 All manner of internet fashion this and that has its panties in a bunch over Patrick Mohr's recent Berlin Fashion Week unveiling. Everyone between here and other places I'm less concerned with is espousing some version of outrage, fear or WTF-ness over his use of bearded androgynous models (which truthfully DO look like some combination of a salamander and a sickly pirate). But seriously, Internet? What is the problem?

Frankly, I think Mohr's choice of extremely ambiguous models is genius. I can't imagine anything better than a fashion designer intentionally (or not, who knows) commenting on the total absurdity that is the runway model. When it comes down to it, how are these models any more grotesque than the usual army of 110lb, six foot skeletors that pony prance down the runway? Loosen up, Internet! Get more comfortable with the illegible and for goodness sake, have a sense of humor. That's what I'm paying you for, Internet!

Patrick Mohr has always had an eccentric sensibility, and his creative use of competing, yet complimentary patterns, textures and colors is one of the things I like best about his designs. His 2008 line was a little bit my dream come true. Ice skates with the blades removed? Obviously, yes please. Knit high-wasted legging pant things? Gimme. Drapey hood that serves no real purpose apart from making you look enigmatic? Uh-huh, absolutely. 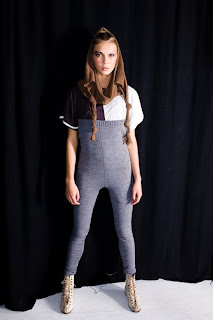 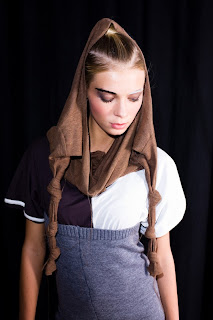 His 2010 line still smacks of a penchant for texture and pattern experimentation, it's just amplified to an extreme. Much of the commentary about his show in Berlin has been so singularly focused on the "horror" of his gender-less models, that people seem to be missing the fact that he's designing exclusively with what appear to be rubbish bags and blankets he found behind a building somewhere. Which is hilarious. And daring. And intellectually and culturally challenging. 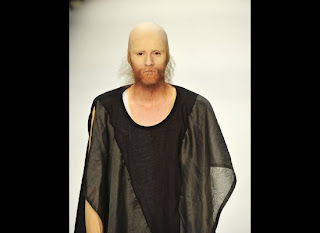 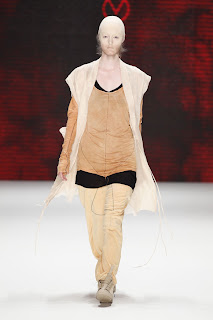 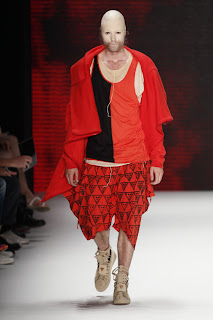 Hey, Patrick Mohr! I want my car sun shade and cat's blanket back.
Thanks for making me reconsider my notions of beauty, though.

Really, Mohr's Berlin show is more akin to a concept album than anything else. He's created an entirely new world inhabited by beings who don't seem to be weighed down by human ideals of body, beauty and binary. So maybe the Internet just doesn't get it. Hey, Internet! Chill out, put on a Yahowha 13 album and watch Mohr's runway video. See if you can think outside of the box for a change.

Ultimately, Mohr's bizarre Berlin spectacle fits nicely within the annals of couture history. Nearly every season some designer shocks onlookers with a line that in some way makes a mockery of haute heads far and wide. Remember when Alexander McQueen scandalized Paris when he had his models march amid broken mirrors while wearing garbage bags as hats? The New York Times style section nearly burst into tears, that poor thing.

When it comes down to it, we're not that much more than kind of funny looking animals that don't have enough fur to survive so we have to make things to wear. Fashion is an extreme version of a necessity--it's absurd, it's bizarre, it's fun, it's often hilarious and, maybe most importantly, it's art. If Patrick Mohr wants to design a line that seems to poke fun of how seriously we take what we cover our skin with and if he wants to use models that poke fun of how seriously we take our gender constructs, then more power to him (though I admit that I hope he gets back to making things that I actually want to buy, because while I appreciate the creative implications of what he's doing, what the hell would I wear that to, I mean really).

So, Internet, why don't you just pour yourself a drink and think about why you have such a visceral reaction to Mohr's models. That would be so much more interesting than all of your performative whining. I mean, after all, Internet, you loved Avatar, which was a cinematic pile of horseshit with a vaguely offensive love story between things that have really wide-set eyes and spots. You can't deal with a few little ambiguously gendered fashion models?

In the words of the wisest among us--United States' eight-year olds--if you hate it so much, then why you lookin'?!
by Michael [von] Braithwaite at 5:35 PM