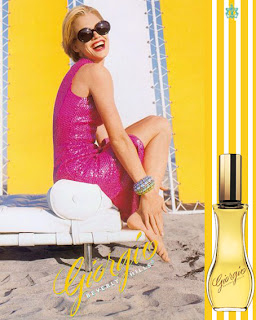 This is what life smelled like in the mid-80s - it smelled like Giorgio, the perfume that came straight outta Beverly Hills, the creation of Fred Hayman who single-handledly created the shopping monster that is Rodeo Drive with his boutique/hangout, Giorgio. Princess Di shopped at Giorgio, and the Reagans, and Halston gave him exclusive dibs on his pieces, and there was a bar and a pool table and once an Arabian man and his harem came in and bought the entire inventory, and slowly Rodeo built itself around this one spot. Out from it came the the stink of the decade, in the iconic yellow and white striped packaging riffing on the classy awning the dangled above Hayman's shop. He sold the perfume to Avon towards the end of the 80s, but not before the life-saving Designer Imposter brand busted out their $9 knock-off, Primo, which was the actual olfactory soundtrack to my teenaged years. 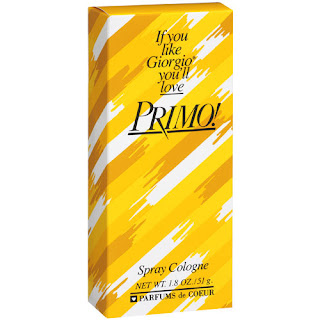 It's really hard to remember a smell you've forgotten. I can't remember what Giorgio or Primo smelled like, but I remember it was strong, and really identifiable, like I could be walking behind a lady in Boston and catch a whiff and know what she was wearing. I didn't like it at first, because I was teenaged goth-punk and I hated everything, especially anything that came in such a sunny package and flaunted wealth, but the more I smelled it the more my nose seemed to crave it, until I was forking over ten bucks at the drugstore for a replica of Primo, which came in a slender canister and hit you with an aerosol blast like a can of hair spray. 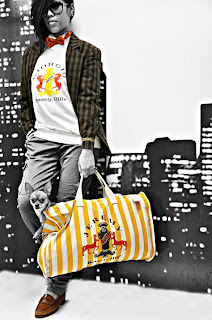 I was thinking about Giorgio this weekend as I scuffed around Beverly Hills, Rodeo Drive to be exact. I've only been on Rodeo Drive once before, around Christmas, and where a normal neighborhood would hang holiday lights in the shape of a kitschy candle or snowflake, Beverly Hills had chandeliers of Baccarat crystal installed in bullet proof glass boxes on the light posts. Make no mistake about where you are, people. And PS, that above picture is from the Fruition Las Vegas web site. They sell amazing deadstock and archival vintage pieces, plus impossible to find stuff like Cassette Playa t-shirts made just for MIA's Boyz video. The sweatshirt it vintage Giorgio, the tote is Jeremy Scott owning it, and the whole look is so totally great. 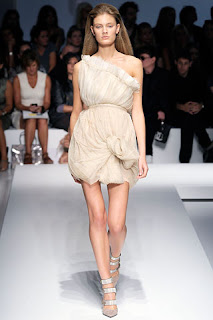 On Rodeo Drive I visited the Ralph Lauren shop, which was actually super gorgeous and felt like a high-end real-life version of Disneyland's Haunted Mansion merged with the Indiana Jones ride - curving posh staircases, framed olden portraits and army - safari gear. At Gianfranco Ferre I saw the above dress, which is even more beautiful in person because the fluffy, bundled fabric crunches in your hand and the back has a brown leather buckled strap that crosses your shoulder. Alas, the staff are the most bothersome salespeople this side of Lush, and the sales folk at Lush I think are on crystal meth, so I can understand why they talk you to death when you're just trying to buy some shampoo, but what was up with the Ferre crew? It's no fun fondling high-end dresses you could never buy with some crazed saleslady tailgating you, so my time was cut short, but most of their stuff was pretty boring anyway. Actually, most of Rodeo Drive was on the ho-hum side, especially MiuMiu which seems to have suddenly become Juicy Couture, but what is totally worth your time is the Rem Koolhaas - designed Prada shop: 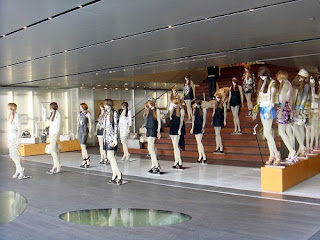 It's open-air, no door, it just sort of opens to the street like a fashionable space ship spilling finely-dressed lady mannequins from its entrance. Or in the case of the photo below, undressed gentleman mannequins. 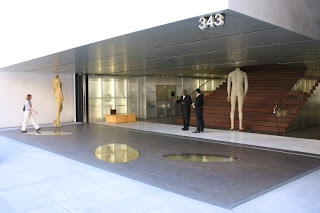 The glassy circles on the floor (practically the sidewalk) are subterranean display cases featuring Prada goods. The inside of the elevator is ringed with tiny security camera screens so you can spy on people browsing the goods elsewhere. The giant staircase cuts through the building, going up the front and down the back, with smaller staircases leading to the spacious men's floor at the top, and women's clothes hung in hallway-like rooms along the side. It's such a complete environment, with video screens showing runway footage hung right on the racks, you feel like you are in not a store but a museum, which makes it easier to be around the clothes as you can't actually buy the art you see in a museum, so no big whoop that I couldn't walk out with a jeweled little skirt-belt-thingie to buckle over my cut-offs. Here, let's look at a photo of the beautiful fake Prada shop installed by some artists on the side of the road outside Marfa, Texas: 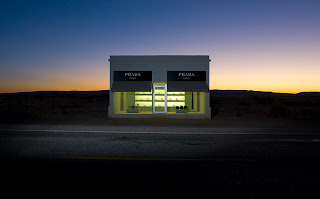 So spooky beautiful. It was meant to just disintegrate to dust, but three days in it got massively trashed, spraypainted and the very real Prada gear inside looted, and so now it has a security system rigged into the bottom-less, un-functional purses and shoes arranged behind the glass. The haters tagged Dum Dum across the front of the building, which is sort of funny, though I don't like to see anyone's efforts messed with in such a way. I do hope whoever nicked the goods are enjoying them without irony, but I doubt it. 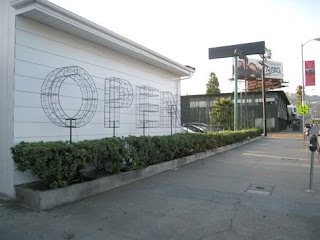 Later I went to Opening Ceremony in West Hollywood. Did I take any pictures of the amazingness of this place, set up in Charlie Chaplin's old dance studio, a warren of rooms leading into walk-in closets, with an upstairs with more rooms labyrinthing into more rooms, all of it stuffed, totally stuffed, with every excellent piece of clothing you and I and anyone ever would love to wear? No, I didn't. I didn't take any pictures because shortly after entering the establishment I fell into a state. I got sweaty and anxious and wanted everything but everything was so expensive I reverted back to some childhood desperate yearning for things, beautiful things I wanted but I couldn't have so why want them anyway, are you a masochist, stop pining after bullshit cocktail dresses and start a class war or something. My head spun around as I drifted like a weird sleepwalker through the racks, touching everything, the Risto lightning storm leggings and the Toga for Opening Ceremony dresses with the shredded skirts, the Rodarte patchwork top that made me think it's time to bust out the 90s patchwork Hipposchemes (RIP) slip dress I thought had moved past it's prime. Back so soon! Excellent! I started to relax. The initial jarring sensation that I was trespassing and transgressing at the same time faded. There was a sale! I decided I could consider only pieces that were on sale. After too long in an expensive place like Opening Ceremony, your notion of what is too much and what is a veritable bargain becomes warped. A $300 dress seems cheap when you're looking at $1,500 dresses. And a $1,500 dress that's been marked down to $300? You can't afford not to buy it! Want to see? 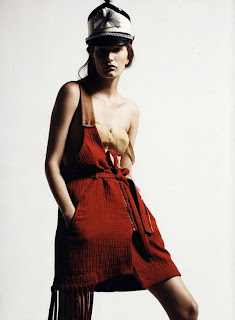 Isn't this the coolest dress/jumper/whatever the fuck it is you've ever seen? It's by Blouson Noir, a one-off line created by Melanie Ward, a power stylist. This dress is made from tea towel material, and I learn now, looking at this picture, that I actually tried it on incorrectly! It was really confusing! No wonder it looked so weird on me. Needless to say I did not get it. Let's take a peek at the terribly foxy designer: 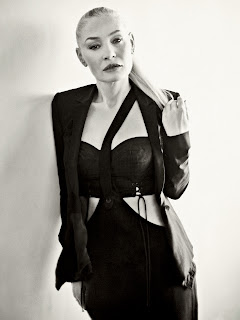 Drea de Mateo plus Marlene Dietrich plus Gaultier's Express Yourself-era Madonna, if Madonna aged. So, so hot. In her own designs, of course. 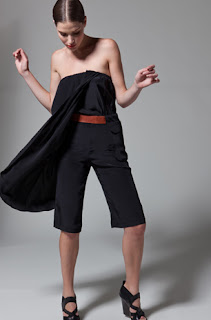 I tried on this amazing jumpsuit by Rachel Comey. Unlike the Blouson Noir tangle of straps and zippers, this piece came with illustrated instructions showing you the various ways you can wear it, which I really appreciated for practical reasons plus it did the trick of making you feel like you were getting five outfits for the price of one. I love the brown leather belt, which comes with a little silk pouch attached. The one I tried on was not as cool as this classic black piece - it was pink, with a pattern of tiny, shiny oysters, the name of the oysters beneath them in teeny cursive handwriting. I love oysters a lot, but I don't love wearing patterns. They often strike me as trendy, like I'll spend money on something and then poof it'll feel over before I know it. Mercifully the jumpsuit didn't fit me - it was pricey, and I was shopping with PMS, low blood sugar, dehydration, and an anxious feeling of overall discomfort. Anything could have happened! What did happen is I grabbed a cute, super baggy Opening Ceremony button-up romper that looks like faded denim but is a heavy cotton, and a baggy grey t-shirt that's totally backless, so you look schlumpy from the front but scandalous from the back, also Opening Ceremony. Here are some more things I didn't get: 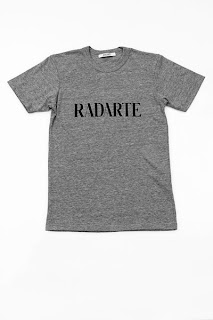 Yo, Mulleavy sisters, you think because I can't afford one of your artisinal $5,000 knit dresses I'm going to spend over $100 on this here ugly, in-joke t-shirt? Are you out of your freaking minds? This is the dumbest thing I've ever seen. Their Target line was cheaper, and was actual clothing, not a sad prank played on desperate label whores. 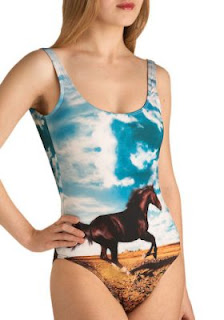 We Are Handsome is an Australian swimsuit brand, and Opening Ceremony had this hear mustang one-piece, on sale, but not in my size. I am so happy to learn about these people! Look at this other piece: 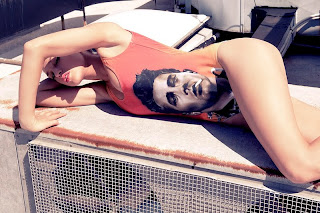 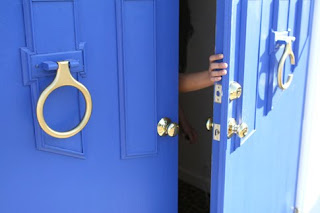 Right next door, attached to Opening Ceremony but requiring you to leave and enter through a separate entrance, is the shop's Little House of Accessories, a small space with Alexander Wang shoes hanging on one wall, a murder of Proenza Schouler bags on another, and jewelry displayed in whimsical barnyard animal cases among furniture made to look like giant pieces of food. By now I was away from the clothing, had made my modest purchases, and could breathe again. So I took some pictures. 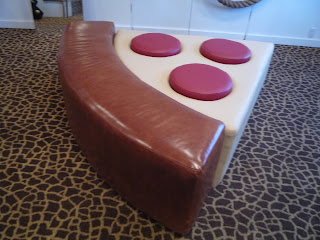 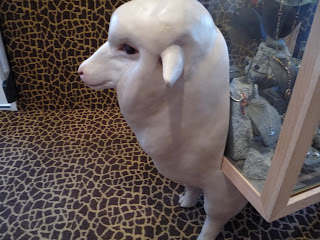 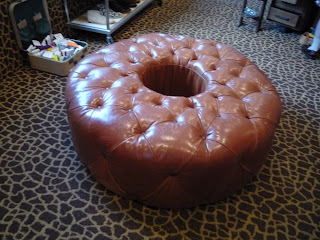 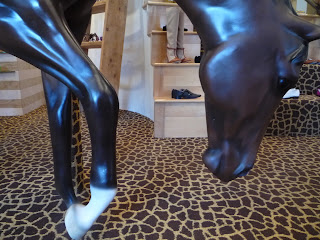 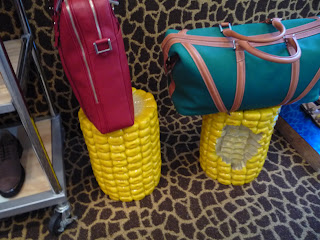 That big green bag is what I'd like to take a chomp out of. Want Les Essentials De La Vie for Opening Ceremony. With butter and salt. Thank you.
by Michelle Tea at 7:37 PM