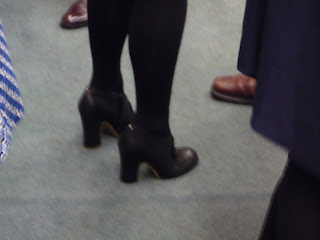 It's not easy being paparazzi. These shoes and the feet inside them belong to Winona Ryder, who made the 80s bearable with films like Heathers and Edward Scissorhands. I totally wanted to kill all my classmates and fall in love with a tortured person who looked like Johnny Depp. Didn't you? Winona wouldn't let me take her picture so I cannot show you how she was tucked into a cute navy peacoat, a black and white psychedelic purse hung on her shoulder, startled eyes staring out from her deer face, just exuding fragility. I didn't feel great about sneaking a photo of her shoes, but whatcha gonna do? You don't get a fun fashion blog by respecting people's boundaries. This was backstage at Litquake's Barbary Coast Award tribute to poet/freedom fighter/publisher/stylish gentleman Lawrence Ferlinghetti. I know the photo is blurry. You don't get a second chance when you're being a sneak, and my battery was dying. Here's who else was backstage . . . 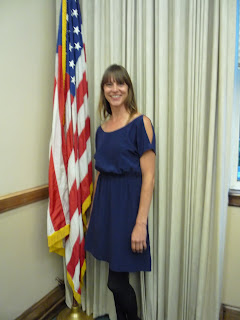 The hilarious writer Beth Lisick wearing a Geren Ford dress she got to borrow from the designer like she's Gwyneth Paltrow! "She was super nice," Beth said about Geren, who she met at a dinner a few years ago. Via a conversation about celebrities (Naomi Campbell) borrowing clothes from shops (Fred Segal) and returning them damaged (funked-up crotch), Beth learned how a person goes about procuring a designer loan!

With a bunch of high-profile Litquake events (like tonight's Porchlight at the Herbst with Exene Cervenka), she figured it was a perfect time to see if she could score some frocks. "She sent me ten dresses! The Fed Ex lady came to my house yesterday. Just a box with ten dresses in it."

What do you do with them when you're done? "She said, 'Unless you go crazy and spill red wine all over it, just send it back, don't worry about cleaning it.' It makes you wonder about the whole culture . . . it's someone's job to get the shit back from people who don't send it back!" Will the Fashion Repo Man come for Beth Lisick? "I'm going to send mine back." 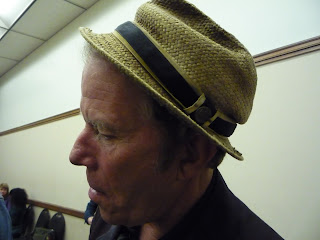 Here we have Tom Waits, totally rough and rumpled and handsome in a crunchy little chapeau. I like the band and the little medallion. The hat looks like it got run over by a locomotive while on the head of some dashing rogue circa 1932, and the woman who'd loved him kept it in her dusty attic, weeping into it each night before crushing it to her bosom in a fitful sleep, slowly going mad from grief. Doesn't it? Laments Mr. Waits of today's newfangled hats, "Now they make them out of paper, they don't do anything. But this one's straw." He's had it for five years. 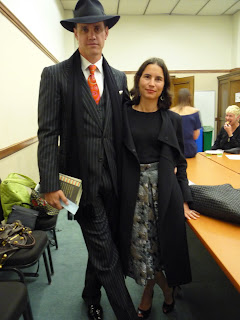 Are we in an F. Scott Fitzgerald novel or what? Like, Tender is the Night, but no one's insane or drunk or having a pistol duel, just being charming and glamorous? This is Robert Mailer Anderson and Nicola Miner, usual suspects at San Francisco's wittiest literary soirees. I asked Robert who made his suit. "My main man," he said. "Tom Ford." But of course! Nicola is wearing a skirt by Marc Jacobs. Let's get a close-up! 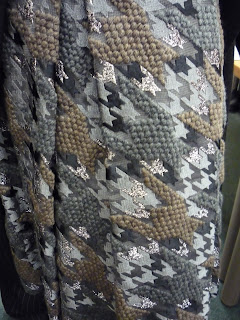 Camouflage and houndstooth, together at last! Stunning! 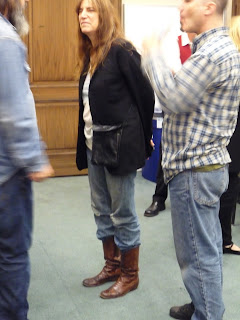 Okay, first I name-dropped the name of a person I don't even like as a way to start a conversation with Patti Smith. So right off the bat I feel bad about myself. Then I ask her if I can take her photo for a fashion blog. She's texting when I ask her this. I should have waited but my heart was in my throat and I'm like, if I don't just blurt it I'll loose my nerve. So she says, "In a minute," without looking up from her cell. I think 'In a minute' means 'If you are desperate enough to nag me about this when it is clear I am busy and uninterested, I will probably do it, because I am Patti Smith and I am a very compassionate, very empathic, totally great person.' Of course I can't bring myself to ask again, so I instead continue to chip away at my integrity taking sneaky snapshots and get massively scolded by a Litquake Lady. Was it worth it? Of course. I wish I could show you the long black overcoat she was wearing. The bottom was so riddled with holes it looked like it had been chewed by rats. I loved it, and I love her brownboots with her baggy jeans stuffed into them, and I love her little leather pouch (she had a Moleskine in it, of course. Black.) and I love her, I love Patti Smith. Want to know what Patti Smith loves? 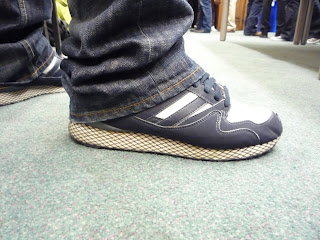 These sneakers. They belong to James Kass, poet and tireless leader of Youth Speaks. He introduced himself to her like a normal person, and she said, "I love your shoes." Then he tweeted it and rubbed it in my face for the rest of the night. 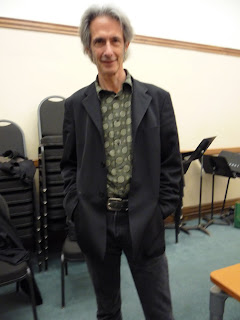 What becomes a legend most? Your basic black jeans and blazer. Lenny Kaye is so great. He's been part of the Patti Smith Group since the beginning, he played in the Jim Carroll Band, he anthologized garage rock in a major way, he wrote Waylon Jenning's book for him, and, most importantly, he helped me with my ongoing project of cultivating attraction to people who are actually older than me. What a fox! He seemed real nice, too. 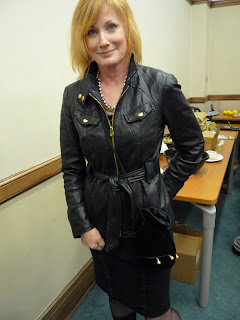 This pretty lady kept getting prettier all night! Her name is Persia Matine, and she's a makeup artist. I shoulda known! She did makeup on the Ferlinghetti documentary, Ferlinghetti. 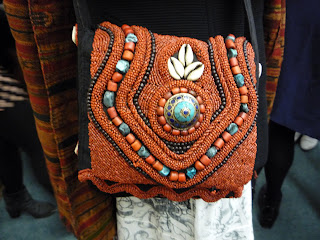 What a cool purse! "It was made by women from a Tibetan refugee camp," said the woman carrying it, a Berkeley person with mutli-culti flair. Check out her man-friend's jacket: 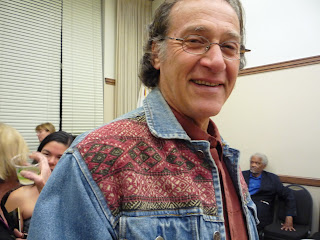 The fabric is from Tibet, too. 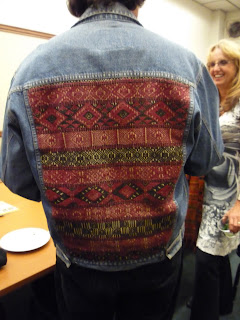 You know they have been rocking this look since 1969, and the cycles of fashion have whorled back around and embraced them. Keep the faith, Berkeley People. 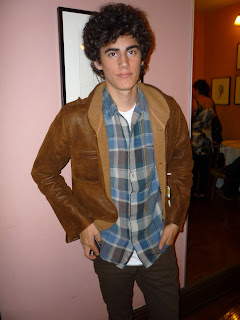 A mysterious boy leaning against the wall at the afterparty. Perhaps he was being paid by Litquake to stand around looking awesome? Money well spent, I say. 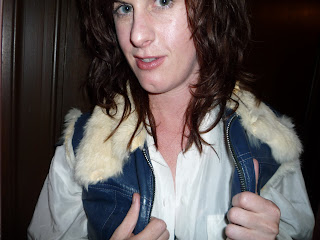 Writer Rhiannon Argo was wearing the best leather vest with sort of shredded fur on the shoulder and collar. See? 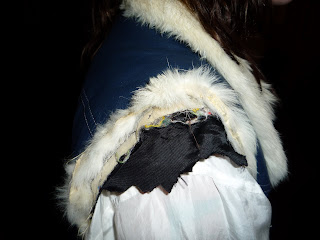 Basically it was once a jacket and Rhiannon allowed the sleeves to elegantly rot away. It's very Just Kids-era Patti, no? 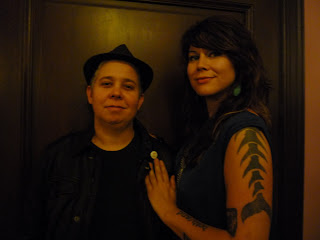 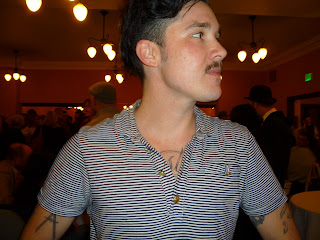 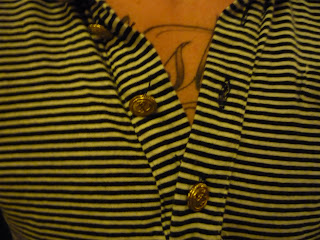 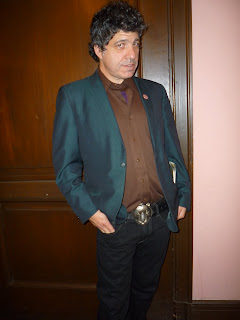 This is Mitche Manitou. "I sometimes can't live up to the belt buckle," he says. I tried to take a close-up, but my camera finally died, releasing me from the tyranny of the blog. The belt buckle is a giant tiger head, and it's great. I leave you with photos of the man of the hour, Lawrence Ferlinghetti, who started City Lights bookstore and press, went to court to fight for Ginsberg's Howl, and who looks great in a hat or an orange pair of spectacles. 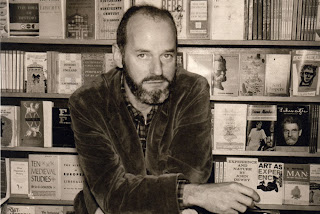 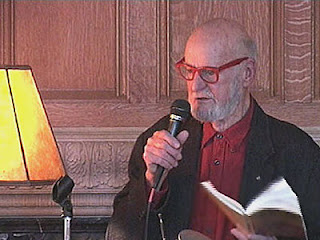 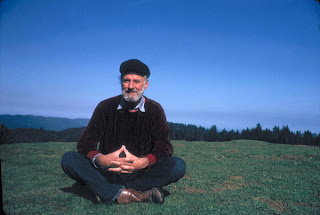