A Collector's Approach to Fashion Magazines


First, a confession: I have never liked fashion magazines. You can name nearly every fashion magazine from Vogue, to Bazaar, to Lucky. I don't care for them. Fashion magazine enthusiasts have been dreading the much-discussed death knell of the magazine publishing industry for years, but I've always been unable to understand enthusiasm for what seems like an antiquated, thoroughly beaten out dinosaur of an approach to style. My stance is only mildly one of ideological difference. The repeated articles about how to master the art of seductive dressing, the best make up looks, and any number of tips on "looking great" or getting that "beach bod" do tend to ruffle my cultural feathers a bit, but more than that, they're so BOOOOORING and redundant.

Here, an impression of the last Vogue I purchased several months ago during a particularly long layover at JFK: 20 pages of thematically disconnected product ads, anemic article about a Hollywood celebrity I don't care about, 30 pages of thematically disconnected product ads, a dull spread, something I'm supposed to do with my make up, more ads, something else forgettable, ads, end.

I was done ten minutes into my layover and so I purchased 20,000 Leagues Under the Sea. It was fine. I didn't get why Captain Nemo has been so vilified.


At any rate, the problem, as everyone knows, with the old guard of fashion magazines is that they don't give you anything more than you could get on the internet. So, what if publishers treated fashion magazines as sources of unique experiences to be had, rather than as sources of information? I don't pay for information anymore. I pay for experiences. I'm no Dionysian devotee, no Maryann from True Blood or anything, but I shop in a store so that I can have the experience of fabric in my hands and maybe I can stop between shops for a pastry, I grind coffee instead of purchasing instant because I like the experience of smelling freshly ground beans-- I like the small rituals of life. I like collecting objects--art, odd items with strange personalities, books with leather-bound spines--because the act of collecting is one of life's most engaging experiences. That's why my two (and possibly ONLY) favorite fashion magazines treat their content like art, like something to be cherished, rather than as overly-cooked information to be consumed.

Favored magazine number one:
The Gentlewoman 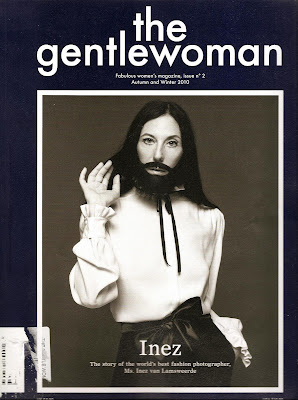 The Gentlewoman, only in its second issue (pretty ballsy move, starting a new fashion magazine at the end of the publishing era), is a work of perfection. This is a magazine version of an exquisitely-curated exhibition-- every detail considered, every page a stand alone work of beauty and class. This is a magazine for grown-ups (not in a creepy way), requiring thought, observation, and time. This is a collector's magazine.

It helps that it comes out in biannual installments (every issue flies out the door, so if you're in the Bay Area act quickly-- you can get one from my favorite magazine store in Oakland--Issues), but more than that, the content of each issue can't be found ANYWHERE else. Even The Gentlewoman's own website is a fairly spare landing page with a brief mission statement and a slim description of the current issue's content.

Everything about this publication sets it apart from its older fashion magazine genre members. First, the design is clean and intriguing. You won't find messy covers screaming the contents at you in a desperate seeming way. The Autumn/Winter 2010 cover is characteristically minimalist and features a bearded Inez van Lamsweerde, dubbed "the world's best fashion photographer." Which she is. The cover even takes into consideration the major difference between the virtual and the physical: the tactile. Rather than the slick, glossy paper you're accustomed to with magazines, The Gentlewoman's cover is semi-matte and textured, setting it apart from first touch. Inside, you'll find all the ads are confined to the first ten pages or so and are stylistically in keeping with the overall look of the magazine, even down to the photographic "mood." From there, The Gentlewoman is divided into 3 distinct  sections (a bit like exhibition galleries), which they call "parts:" 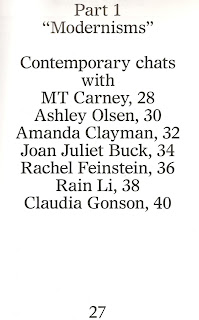 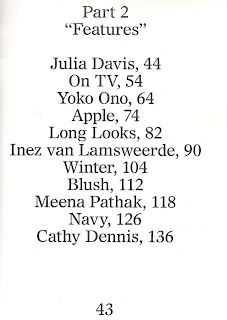 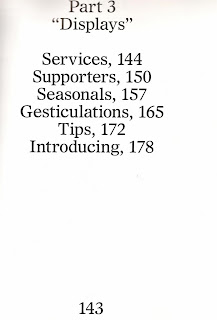 How many of those people in "Modernisms" or "Features" do you recognize by name? Only a few, right? That's the other brilliant thing about The Gentlewoman-- they feature people who are actually doing real work in the world, which means you've probably never heard of most of them. The features range from news anchor, Lukwesa Burak, to a British comedian, to a psychotherapist who specializes in helping artists achieve financial wellness, to apples (yes, the fruit) and explore fashion and culture from every possible angle.

Who gives a shit about Anne Hathaway, how to drive him crazy in the sack, and this Winter's must have eyes??? I would so much rather read an interview with the thoroughly bizarre and incomparably ingenious Inez! She worked with Alexander McQueen and wears the strangest array of facial expressions you've ever seen. What has Katy Perry done lately that's not inane? Nothing. 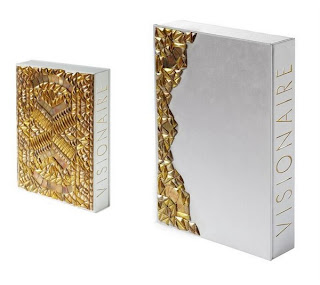 Visionaire is arguably not a magazine. At least not in the traditional sense of the word. In fact, Visionaire "is a multi-format album of fashion and art produced in exclusive numbered limited editions." Which is to say, I've never purchased one because I can't afford one (if you think you can afford one, then you can find each issue after its release at SFMoMA's bookstore and other locations around the U.S.). BUT I love the fact that they exist (since 1991) and they make all of their content available on their site, which is a small comfort and a large time suck.
Like The Gentlewoman, Visionaire operates within themes. Each issue invites its submitters to explore vague topics such as "Magic," "Solar," "Sound," or--most recently--"Spirit." "Spirit" is dedicated to the memory of Alexander McQueen. The genius of Visionaire is that their submissions come from fashion designers, fashion photographers, world-renowned artists, filmmakers, and musicians. It's an experience extraordinaire!
Issue 48 (above) included contributions by Sofia Coppola, Gus Van Sant, Karl Lagerfeld, Mario Sorrenti, and Mariko Mori, just to name a few.
Every edition is a multi-media experience, including the tribute to McQueen. Check out the trailer for Issue 58: Spirit (which was released in June):
I won't spend $6 on an InStyle or whatever the fuck, but that trailer 100% made me want to drop $300 on a limited edition Spirit. That and the stunning work inside.
I know nothing about the ins and outs of magazine publishing, know nothing of its future, and am wholly uninterested in the implications of that future. But I do know that in a time of publishing unrest, The Gentlewoman and Visionaire have not only managed to engage someone who is anti-magazine (me), but they have also managed to re-imagine what it means to be a magazine and what the magazine form itself can accomplish. In doing so, they have turned themselves into commodities. Something to be collected, displayed, talked about. They have made themselves the embodiment of couture in magazine form. Well played.
by Michael [von] Braithwaite at 6:44 PM