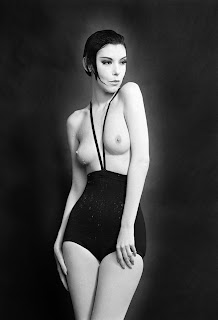 By the time you read this post I'll be baking on a beach full of homosexuals in Provincetown, Massachusetts, the gayest spot in New England. I lived there for a month in 1991, smack in the middle of my Lesbian Feminist Nervous Breakdown, when I lost my mind due to exposure to sexism, misogyny, etc. In Provincetown I basically did nothing but eat little containers of cruelty-free hummus and obsessively read American Ground Zero: The Secret Nuclear War, a really intense book about how the U.S. government nuked the shit out of Nevada in the 50s. Living a hummus-only Low Blood Sugar Lifestyle encourages paranoia; throw in the details of a bonafied conspiracy that killed a bunch of people via radiation poisoning - easily the creepiest way to get killed by your government this side of syphilis - and I was a wreck you guys! To relax I liked to walk across the street from the boarding house where I rented a room and try to sunbathe topless without experiencing gender oppression from the pigs. 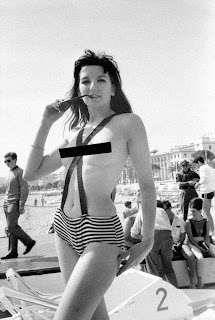 On one such day I was lying on the shore in a pair of bikini bottoms (okay maybe they were underwear) and no top, just minding my own business sunburning my nipples when suddenly a shadow was cast upon me, blotting out my sun and totally ruining my tan. I cracked open my eyes. It was The Man! A copper, standing scornfully above me, ordering me to put on my top, even though there were men with their tits out all over the place, being free and getting evenly tan. Such injustices were so difficult for me to swallow in those days I routinely lost my mind over it. The cop was sort of hearing my protest about it being unequal protection under the law - I was lecturing him as I pulled on my bikini top (which I am completely sure was actually a black lace bra), but when I likened him to a Nazi, he told me, I lost him. No one likes being called a Nazi. In the near-mystical mental state of heightened consciousness my low-calorie cruelty-free diet of veritable starvation was providing me, I could see a very clear lineage between Nazis enacting genocide on official orders and, um, this cop making me put my shirt on on the beach. 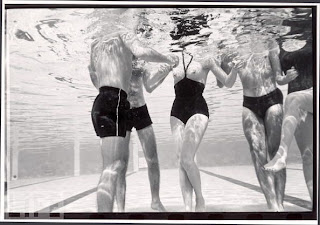 Anyway, in 1964 the Austrian designer Rudi Gernreich - who had come to the U.S. to escape the Nazis - debuted his brilliant swimsuit, the monokini. Rudi was a faggot libertine freedom fighting genius who coined the awesome term Unisex. Really, one of the best terms in the whole world. Rudi wanted to free women from always having to keep our excellent cute tits under wraps, and his first valiant effort was this cool, high-waisted one piece with little straps that slingshot between the breasts and around the neck. It totally does the trick of looking risque and sophisticated at the same time, daring for sure but amazingly not sleazy or cheesy. It's actually classier than a lot of suits that cover more territory. How did he do it?! How I wish I could get one! Here, let's look at more wonderful monokini pictures together: 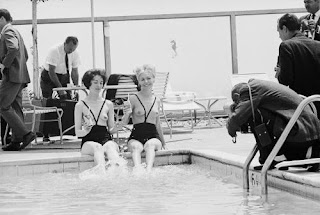 What, just drinking a juice box poolside in my monokini, stop making such a big deal about it, Dad! Don't they look weirdly wholesome? 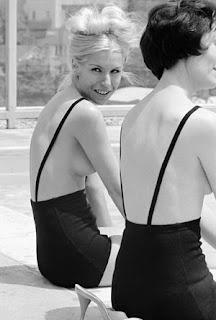 I really, really love these girls. In mustard! One of of my favorite colors. 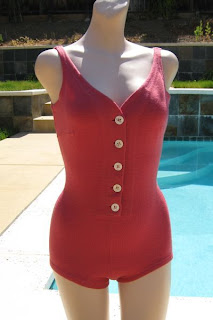 Rudi made other, less controversial bathing suits like this super cute boy-short onesie . . . 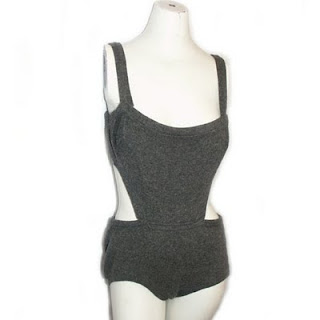 And this one-piece that has such a terrific design, and I love the depressing gray shade for a swimsuit, but it is made out of WOOL! It's like he's trying to punish you for going on vacation or something. 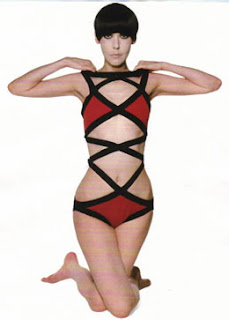 Okay this is the best legal bathing suit ever. The tan lines would be ridiculous, but it comes in a strong second after the contraband monokini. The MODel is Peggy Moffitt, who looks just like Karen O with a dash of that crazy bitch Danielle from Real Housewives of New Jersey thrown in. Can't you see it, just a little, in the face? 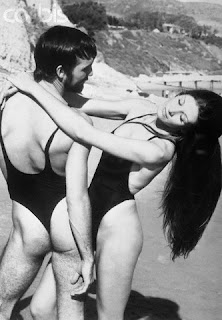 Rudi predicted that the 1970s would be all about Unisex, baldness (unisex baldness - duh!), and nudity. He really did his part to make the dream real by designing the above unisexxxy swimsuit. Perfect for an impromptu dance sesh on the beach with the hottie you're having a very egalitarian summer fling with. 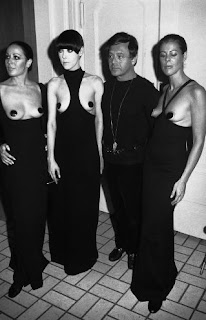 Rudi took his tits-out design philosophy off the beach with these glamorous evening numbers. With how badly the burlesque revival has ruined the pastie for me, it's stunning that this look feels bold and daring and cool. The one on the right is a bit schlumpy (you just don't want to look schlumpy with your tits out), the one on the left is too titty for me, a bit like a joke or a Linda Montano performance piece, but that number Peggy Moffitt is sporting in the center, casually smoking a Nat Sherman in her avant-garde hairdo and aggressive couture, is just right. 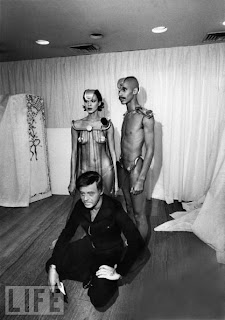 What is happening in this picture? Only some lucky LIFE magazine photographer knows for sure. 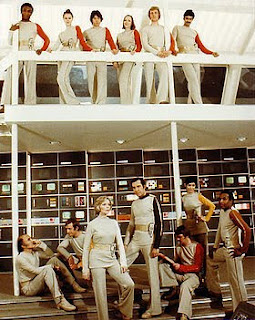 Here are some other amazing things Rudi Gernreich did during his stint on planet earth: Designed the costumes for Space 1999, a show I was super into as a kid, though I did NOT want the toy Space 1999 spaceship for Christmas, I wanted Star Wars like everyone else,and I was bummed when I got the cut-rate Space 1999 job with its little generic orange-suited action figures that were most definitely not wearing Rudi Gernreich, and were gender-neutered rather than exoticly unisex. 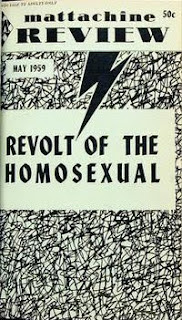 As if Rudi didn't do enough to advance civilization with the creation of the monokini, he went on to co-found and dump money into the fucking Mattachine Society, the first ever Gay Lib organization. He was lovers with the Society's more prominent founder and Radical Faerie Harry Hay! Rudi Gernreich is an OG - Original Gay. Additional swimsuit concepts we can thank him for include the pubikini, a garment even more delusional than the monokini, with a sheer fabric window to feature a lady's healthy pubic bush (can I have a merkin to go with my pubikini?)and - get ready - the thong. Try, if you may, to imagine a time before the thong. A thong seems eternal, surely thongs just always existed, like trees and gravity, but no, there once was no thong, and then there was Rudi Gernreich, and now there are thongs. Good job, Rudi! I don't even care about a thong, I'm just impressed with how much thought this guy put into our nether regions.

Rudi Gernreich also made a bunch of pieces that had nothing to do with butts or boobs. Check them out, being modeled by little miss Moffitt, who looks like she had her makeup done by Man Ray: 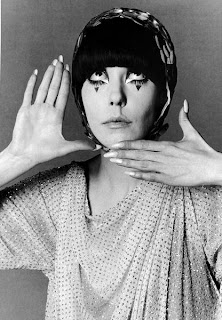 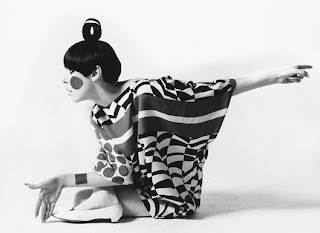 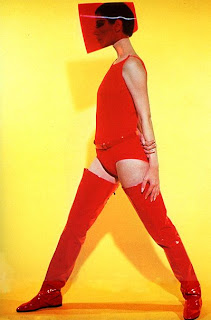 If I wasn't getting up at the crack to drive to the Cape I would spend another three hours researching exactly how Rudi's designs influenced the red and white polka dot one-piece with intense cutaways I got at Target and will be wearing poolside tomorrow. I would get the dirt on the monokini Victoria's Secret made that looks pretty interesting but gets points deducted for being too sexy. I would be dredging up Peggy Moffitt's life story. I would cite the above boots as a major influence on the thigh-high leather waders Miuccia Prada sent down the runway, what, last year, with photos to back up my thesis. But I've got to get to sleep, people. The days ahead promise visions of washer-dryer Ptown gays on vacay, cheap thrills at Marine Specialty and luxury longings at Map, plus a peek into Marc by Marc Jacobs while all hopped up on an espresso shake from Spiritus, plus, fingers crossed, a glimpse of John Waters peddling down Commercial Street in a seersucker suit. That's what happened last time! Tune in next week to see what I saw, and for now, content yourself with this vision of pure inspiration: Peggy Moffitt like a couple years ago! 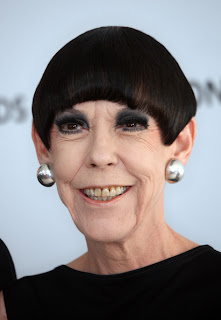 An argument for picking a look and sticking with it.
by Michelle Tea at 6:29 AM