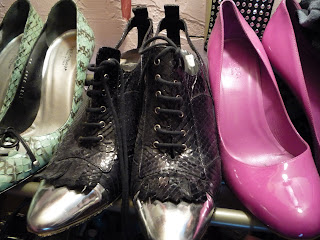 Tara Perkins started the Sex Workers' Art Show, a traveling cabaret of performance created by artists who worked for some or all of their lives in the sex industry. The tour took pro-sex work culture out of the big cities where everyone is perhaps jaded about yet another, you know, memoir by another stripperhookerprodomphonesexoperator into places like Tucson, Huntsville and Little Rock where saying you even think prostitution might be, like, a job, is totally radical and important. She went on to edit the excellent anthology Working Sex (I tried to get her to name it Hey, 'Ho, Let's Go! but probably the publisher wouldn't have gone for that, anyway), and now spends her life traveling around the whole entire world as manager for Gossip. She is also my top Enabling Fashion Friend. 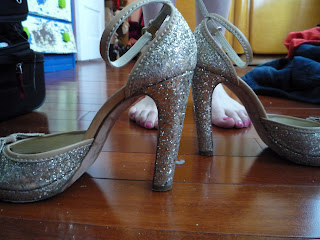 It's really good to have Enabling Fashion Friends, and if you grew up broke, then got politicized about brokeness via class, queer, feminist and punk politics, then find yourself an adult who is miraculously not broke and also, yes, very much obsessed with fashion, then it is absolutely imperative to have an Enabling Fashion Friend. Tara is a perfect EFF because she too grew up broke and was hazed by the same fashion-suspicious subcultures that had me selling off, at age 22, all my most excellent clothing because they were either made of leather (also known as dead animals) or were made by a MAN to OBJECTIFY MY BODY. There was a Buffalo Exchange in Tucson, Arizona in 1991 that loved me for a minute as I brought in bag after bag of motorcycle jackets, Fluvog heels and, most tragically, a hot pink bra and girdle ensemble loaded with rhinestones, fringe, sequins, beads, and, I think, a hood ornament dangling between where my cleavage maybe would have been had I not been eating a poor vegan diet for nine months. 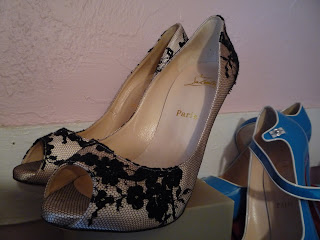 I can pin point the exact minute that I allowed my stifled obsession with fashion to emerge. It was at the end of the very first Sex Workers Art show tour, driving the van from Chicago to San Francisco in one looooong, insanity-creating drive. We drove all day and when the sun went down we drove through the darkness and when the sun rose we kept driving, and driving and driving, until we didn't know what day it was, what time of the day, or if time even really existed. One of the things I did to keep myself an alert navigator and prevent Tara from falling asleep at the wheel was page through fashion magazines. I would hold open a copy of Vogue and force Tara to behold different outfits. Look At That! I'd holler. Look At That! That Purse Costs FIVE THOUSAND DOLLARS! We would gasp and cluck at purses that cost five thousand dollars. We drove across the country that way, and when I arrived home I felt like I had been the victim of some bizarre brainwashing experiment of my own design. I promptly bought a subscription to Vogue, so I could stay current on five thousand dollar purses. 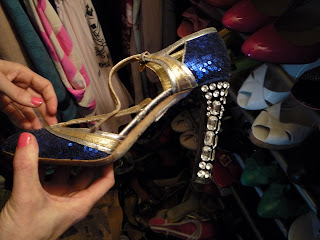 I was with Tara the one time I shopped at Century 21 in New York City and found a pair of Marc Jacobs shoes I had already seen discounted somewhere else but they'd still been too much, and that was tragic because they were easily the best shoes on earth, and ever since I'd carried a feeling around in my heart, like I had passed my soulmate on the street and then lost them in a crowd and would never, never know true love in this lifetime. The shoes were at Century 21, only one pair among the thousands of shoes, and in my size, and at a rock-bottom price that I, with a wallet full of I'm-On-Tour cash, could buy without regret. That was the same tour that we showed up late to pick everyone up with a big story about New York City traffic, but really I had been buying a Louis Fauxtton on Canal Street, and she had been enabling me by picking up a fake Balenciaga. Tara was the first person I called after breaking down and buying the Mike and Chris leather hoodie I'd been obsessed with for a solid year. I was rushing on crazy dopamine and adrenalin and whatever other chemicals were triggered by the the purchase, and it felt a little like calling my AA sponsor after buying a bottle of Jack Daniels, if my sponsor was like a really terrible sponsor who would say something like Good For You, You Deserve It, It's Only Money And We're All Going To Die Someday! (Incidentally, I find the It's-Only-Money-We're-All-Going-To-Die-Someday line of unreason very persuasive when shopping). Tara is who invited me to Paris Fashion Week, one of the many glamorous fashion-focused things she gets to do as Gossip's manager. Because of her rad job she gets lots of goodies for free and is also able to buy some really nice shit. I stopped by her house in Portland this weekend to make her show me her clothes. 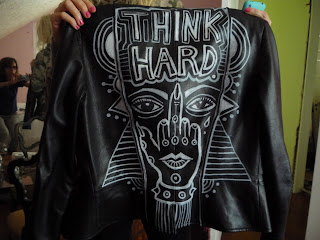 A Thierry Mugler leather jacket defaced and enhanced with art by Cody Critcheloe, the genius behind the band Ssion who also makes music videos, is a visual artist and, Tara tells me, just released his first film, BOY. "You will shit a brick," Tara enthuses. "It is like all the music videos from Ssion's last record, strung together with this storyline - seriously, it is incredible." 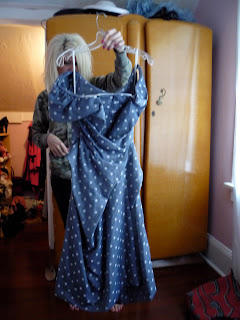 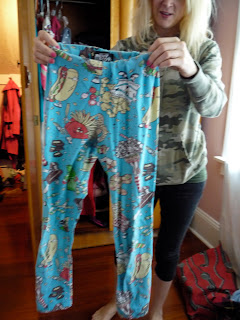 "This is a joke. They're my favorite. They look like a pair of child's pajamas."
(They're leggings from Jeremy Scott's Food Fight collection) 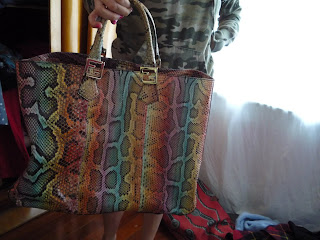 "I mean, what the fuck do you wear this with?" Tara asks of a rainbow Python purse gifted to her by Fendi. "Black, pretty much." 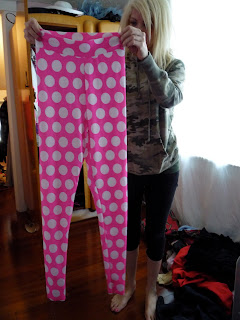 "These are intense Peggy Noland leggings. Her shop is in Kansas City. When I went there the ceiling, the wall, the outside of the store was completely covered with stuffed animals. It was the dead of winter and there was all this gross snow on them. It was great." 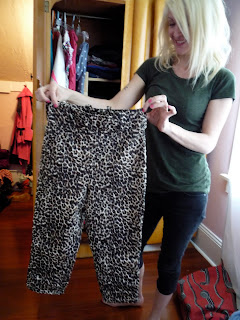 "I'm obsessed with the website these Peg Bundy capri pants came from. Everything is trashy and cheap. My whole summer will be stretch capri pants from them. They feel like wearing nothing." (It takes a while for Tara, humiliated by the site's name, to reveal it: pinupgirlclothing.com) 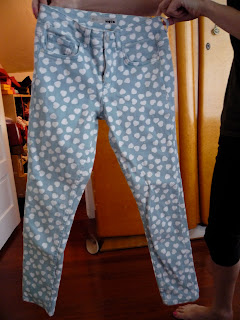 "These are from Topshop! Topshop is fucking amazing." 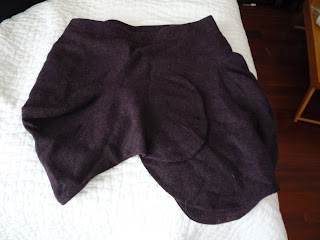 "This is a Vivienne Westwood skirt that's slightly big and also has mud on it 'cause that's how I roll. That's the thing about paying a bunch of money for clothes - I'm just going to ruin them. I'm going to wear them as clothes. A moth ate a hole in this one. Asshole." 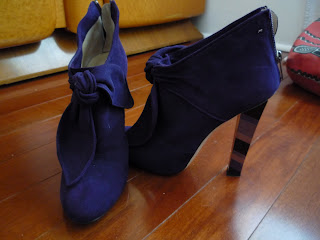 "When did I start thinking it was okay to spend a lot of money on clothes? I'm sort of backsliding on myself right now because I'm starting to realize what $600 means when you spend it on shoes. I've been ruined by most of my adult jobs being easy money. 'Cause, when you can be broke one day and have a gigantic sum of money the next, you don't - I don't want to say respect money, because I don't know that you should respect money, but it ruins your attitude when you can be broke one second and then go work a few hours and make $800. Stripping, or whatever. You just feel like it grows on trees. And there were times when I wasn't stripping, but I still feel like my attitude toward money is doomed for the rest of my life." 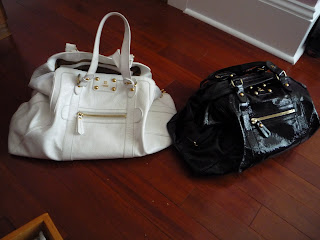 "The white is for summer and the black is for winter, and it hasn't been definitively either, so I keep going back and forth. One of them was free." 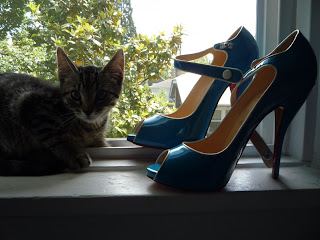 "I think it's hilarious that these look like stripper shoes from (crappy Olympia clothing boutique) Metro or ordered on the Frederick's of Hollywood website for $45, but they're Louboutins. And what idiot would buy the Louboutins when you could buy something like them at Metro, but the fact is they're better made." 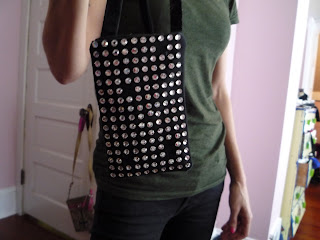 "I have to show you my first free schwag. Christopher Kane made this - oh, is that mold? Bogus. Are you dust or mold? He bothered to sew a tag on it. It's Swarovski crystals that popped off immediately. It was the first fashion thing I did with Gossip, Fashion Rocks. The gift bags were a joke. There was this little Swarovski crystal wallet with a credit card inside it, and $200 on the credit card, for no reason. This doesn't even fit a cell phone, but for a while I shoved my Trio in there." 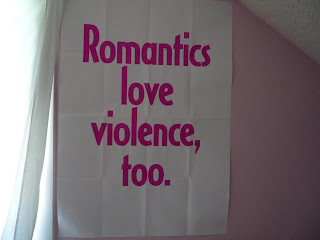 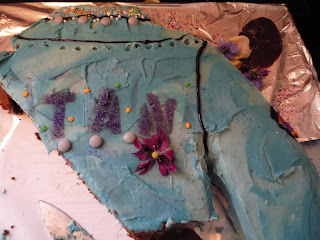 This is the birthday cake for Hannah Blilie who plays drums for Gossip and whose denim-only birthday BBQ party I crashed. The cake is a frigging jean jacket, okay? With punk rock studs and a stenciled nickname on the back in purple sugar. Amazing. 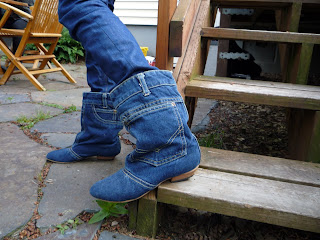 Hannah's wearing these boots made to look like a pair of jeans, which she stole from her girlfriend Brandie's closet. The pockets are workable, and moments before this photo was taken a bandana with a marijuana leaf pattern had been jammed into it.

I inadvertently caused some controversy at this BBQ, by insisting that certain guests hadn't followed the denim only dress code because they were wearing, say, gray jeans, or a purple chambray shirt. But not only were the hosts being generous with people's interpretation of their theme, but, I learned from an actual fashion designer, Molly Gove, that colored denim is still actually denim. You all probably knew this already, but I didn't. Here's Molly: 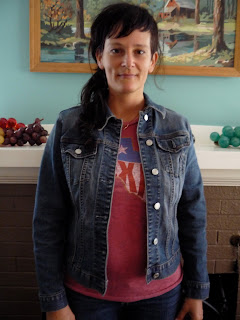 "Denim," Molly explained to me, pointing at her own denimy legs for emphasis, "is a twill weave that's kind of a large weave. In denim, the warp yarn, when it's being woven, is white, and the weft yarn, which is the yarn that goes side to side, is the color, which traditionally is indigo. As long as it's white and a color then it's technically denim. You see these jeans called 'bull denim', which is white on both sides, and dyed. That's not true denim. True denim has two different colors."

How do you know so much about denim?, I asked her.

"I'm a fashion designer, and I went to school for it. I was working at Ralph Lauren and one of the things I did there was denim. I did three different lines - Lauren, Chaps, and American Living."

Molly just moved to Portland and is gearing up to launch a one-of-a-kind dresses outfit. Meanwhile she is operating an alterations business that specializes in tailoring for butches and genderqueers called Sew Gay. 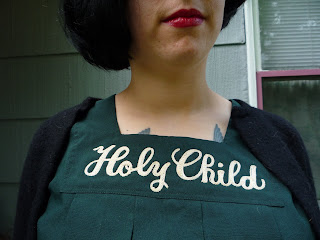 My friend, the writer/zinester/illustrator Nicole J. Georges, was one of two people at the BBQ who profess to owning no denim whatsoever! Believing that wearing any sort of costume excuses a partygoer from not dressing as requested, she wore this church choir jumper gotten at a clothing swap. That Holy Child embroidery right where a good script tattoo could go made me want, um, a good script tattoo reading Holy Child. 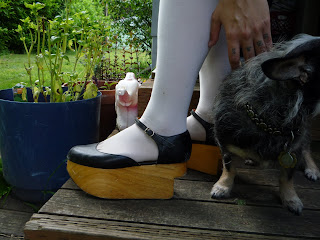 Other things I want: Nicole's vintage Vivienne Westwood platforms. Did that dog take a bite out of the heel or what?!

For the record, my favorite denim purveyors are Earnest Sewn, and if I could move into their rustic NYC store and live there forever, I would. 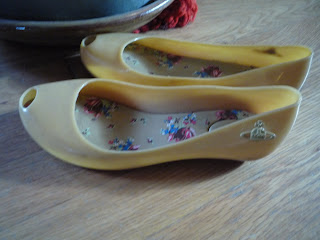 I leave you with these Vivienne Westwood jellies left by the door.
by Michelle Tea at 1:10 PM