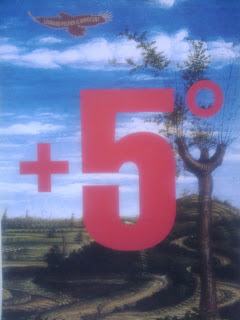 This is the invitation card to Vivienne Westwood's Gold Label AW 09/100 show in Paris. Before having the extreme good fortune of getting to go to fashion week, I hadn't thought about how designers got the word out about their shows, but once I was there, watching the artful invitations come in was an all-day delight. Stella McCartney's had a light-up yo-yo attached to it! As excited as I was to finally have something by Stella McCartney, even a plastic yo-yo, I swiftly became annoyed by the endless weird beeping noise the thing made. Gaultier's came covered in fishnet. Others, like Chanel, weren't gimmicky but classy. I like the Westwood one because it's kind of spooky like a Dali landscape, and up in the corner is the silhouette of an eagle with the phrase LEONARD PELTIER IS INNOCENT from wing to wing. Westwood has been using her clothes and advertising to bring attention to the plight of Peltier, an American Indian Movement member serving two life sentences for the alleged murder of two FBI agents. The case was super bungled, the FBI had been terrorizing the Pine Ridge reservation, and on top of it all Leonard Peltier may not have killed anyone - check out the documentary Incident at Oglala for the whole story. And check out some more pro-Peltier looks and ads from Vivienne: 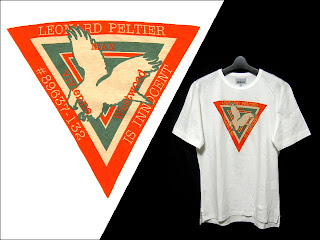 A t-shirt for her Seditionaries lines 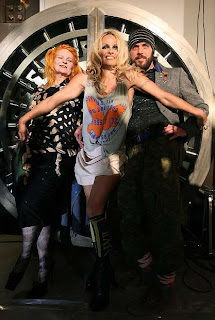 The designer with her husband,
and unlikely muse Pamela Anderson,
in a Peltier t-shirt, backstage AW09/10 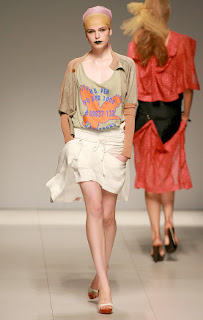 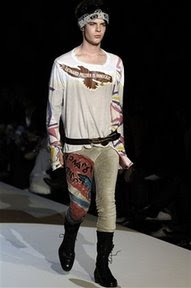 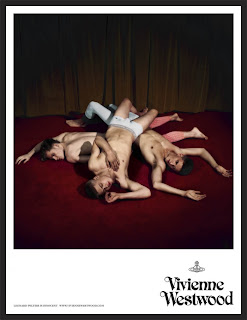 And her SS10 men's underwear ad campaign, featuring these young lads, freshly exhausted from, like, a sex show in a high-end theater in Vienna, maybe? Who knows. Equally as enigmatic are the ones featuring a German shepherd, or a handsome young lad sort of wrangling the German shepherd. Oh here, I'll just show you - 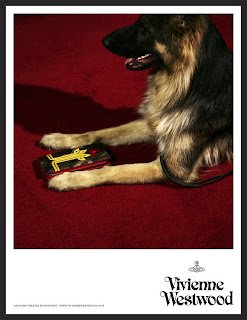 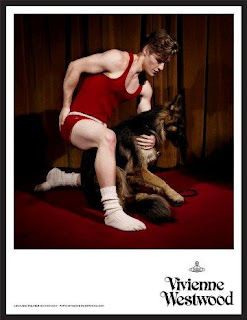 Weird, right? I love this campaign, shot by Sean and Seng. And down in the lower left-hand corner, too tiny to catch here, is LEONARD PELTIER IS INNOCENT.

Okay, so back to the point of this post: invitations! Here's Jean-Charles de Castelbajac's SS10 invite: 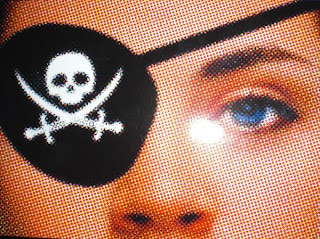 Pirates, Parrots and Paradise was the title of this collection, and the designer sent models down the runways with real parrots on their shoulders! That gorgeous jacket Beyonce was wearing in the Telephone video is from this season. Oh here, why am I being so lazy about it: 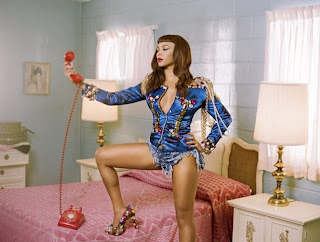 And some more looks from that collection: 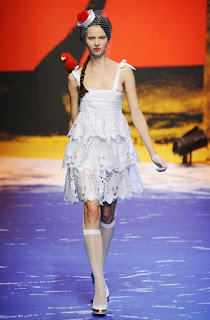 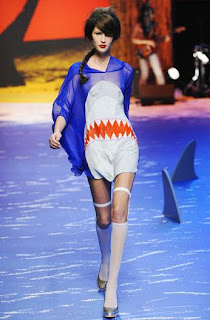 I love the runway sharks! 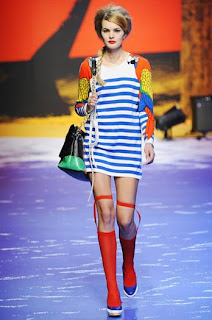 For the AW09 show, which had both a Muppet and a comic-book theme, the invitations were these crazy, like, Manga newspaper comics that folded out into a poster of Miss Piggy or something. I think that Castelbajac and Jeremy Scott are being occasionally visited by the same muse, a muse who is really into Disney and other mainstream pop culture kitsch. 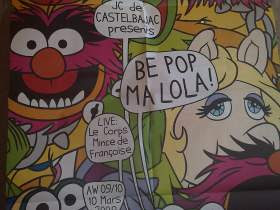 Here's the 09 invite. The models ended the show by flinging into the audience fake Obama dollar bills with the words BE POP! fake-scrawled in fake-lipstick over the not-yet president. Fashion shows are so FUN! 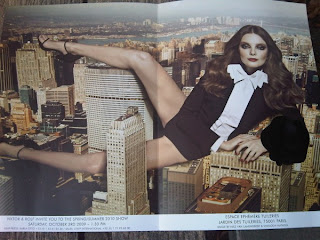 Here's Viktor & Rolf's 50-ft queenie invite for SS10. Amazonian model destroys metropolis with one pilates move. The clothes they sent out for this collection were some of the greatest things I've ever seen. I know I say that all the time, but I always mean it. Look: 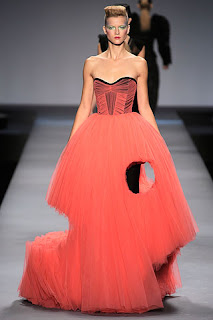 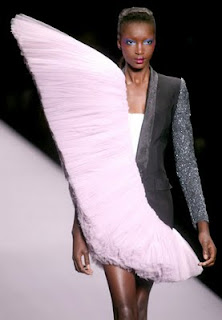 Suit jackets + tutus, together at last. 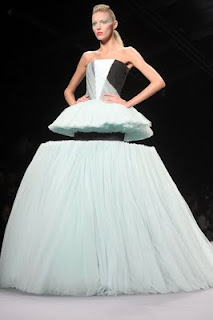 Can you even handle this? The New York Times magazine hilariously provided readers with the directions on how to MAKE the pale blue Cinderalla ball gown above. It only takes 163 hours! Reading how much painstaking effort goes into crafting such a creation (not to mention the genius of conceptualizing it) makes me soften towards the astronomical price tag. 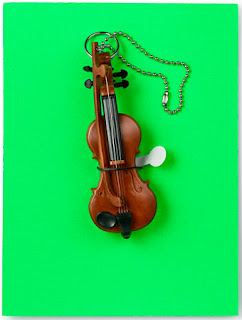 Remember I mentioned Stella McCartney's buzzing, blipping yo-yo? The designer often attaches trinkets to her invites, like this little violin keychain. Cute, right, but it plays "Ode to Joy" and I bet it is as annoying as that blasted yo-yo. Here is another McCartney goodie, sent out while the designer was preggers, SS07: 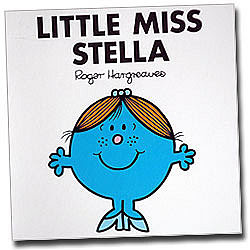 I mostly didn't love that collection, but here are some pieces that worked for me: 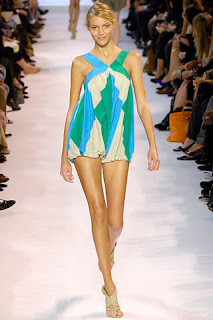 I was actually obsessed with this romper for a minute. Maybe it was the romper that sparked the current romper trend that I am so massively into? Before then I could only find retro 80s terry cloth rompers at thrift stores, which is fine, I love them, too, but I'd like to thank Stella for expanding my romper options. 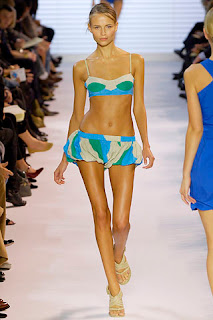 How about an awesome bikini to match your awesome romper? Okay! I like how bloomer-y those bottoms are. An avant-garde alternative to boy shorts for those who don't want to be singing the thong song. 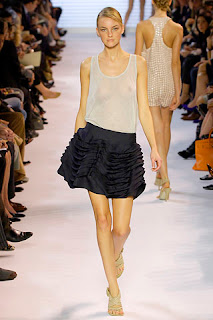 I am doing some soul-searching right now, asking myself: Do I like this look, or do I just like that you can see the model's tits? Because I love when designers send models down the runway in something sheer with no bra. When I saw Stella McCartney's AW09 show in Paris she'd done the same thing, and it was my favorite model at the time, Raquel Zimmerman, and I just thought it looked so excellent. I mean, you can't not exude confidence walking around with your tits out like this. Okay, I guess you could be exuding Histrionic Personality Disorder, but not with a ensemble like the one above. I think it's just like super sophisticated European tits-are-no-big-whoop, and also a little bit like she's wearing her own body as jewelry. Oddly classy. 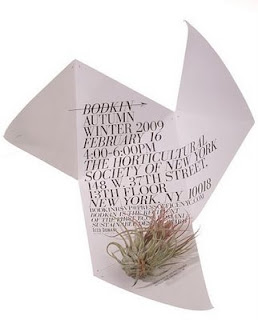 Here's an invite from Bodkin, a line I like a whole bunch. I like this invite a whole bunch, too; the origami-ness of it, the weird little air plant (air plants are so spooky, the writer Eileen Myles has a whole segment in her amazing novel Cool for You about the creepiness of air plants, and I think about it every time I see one), the random italics, the font, all of it. Their AW10 line makes me long to wear PANTS, which is hard for me cause I can't ever seem to ever find a pair that fit me right. I'm not talking about jeans, I mean lady-pants, adult clothing. Here: 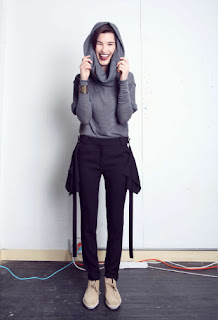 What's that stuff hanging off her hips? I don't know, but I like it! It's like an apron, or, god help us all, a sort of newfangled bondage pants. Handsome. 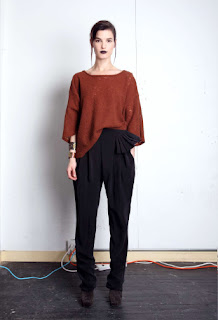 These pants look like something I would see in Barney's and start crying. First because they would cost too much and I would take it personally and feel injured by life, and second because they just wouldn't look right on me. Is it because I am a shrimp that I have such a hard time with lady pants? Anyway, I love the fan detail on the hip, I love the fit, and I love how the model solved the age-old to-tuck-or-not-to-tuck problem: both! 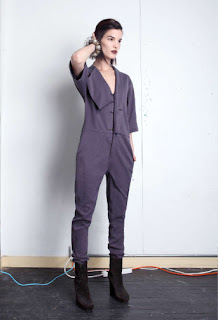 It's like a romper with legs! God, I LOVE this! I love the avant-garde half-collar-thing, I love the vaguely utilitarian vibe of it, and I would love an alternate reality where I could find such a jumper for a short person like myself. Those things fit even worse than a pair of lady-pants, because at least pants you can hem. Jumpers are just one bad fit from shoulders to ankles. It sure is nice to look at, though.

Okay, that's it for the invites. But, speaking of pants: 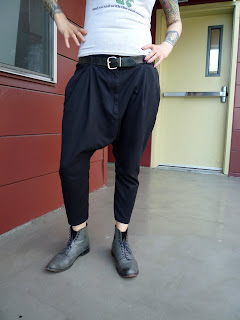 I super loved these dropped-crotch, dhoti-style pants Jet Black was wearing when I stopped by her salon, Crime Lab, for a hair cut. She told me that, five years after seeing some in Spain she just up and made herself a pair out of some thrifted men's pants. Aren't they cool? She made them! This is very impressive to me. I can't sew at all and gave up after two miserable Adult Education sewing machine classes I took when I was 18, so people who can actually make a fashion dream come true are like supernatural to me. She made herself a denim pair, too. Magical! And, speaking of DIY: 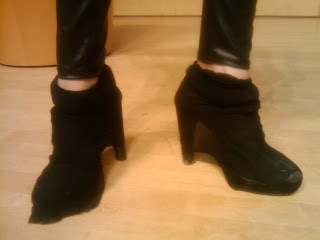 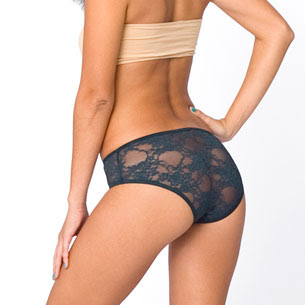 These American Apparel lace undies are totally cute, except guess what? After like two washes all the elastic in the fabric wiggle free and they become hideous merkins, shaggy with fringe! In the case of the black pair it especially looks like your hearty pubes are bustin' through the lace. Yikes! Yeah I guess I could hand wash them but give me a break, it's not like they're $50 panties from Agent Provocateur! They're just a pair of daily drawers, spiffed up a bit with some lace, and they should be able to handle the washing machine without becoming Gremlins. Okay. I'm out.