Socks to be you. 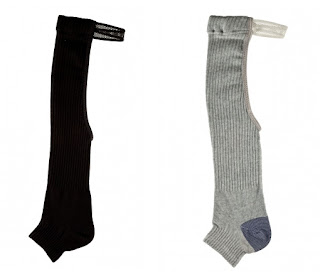 What the F are these? They look like some sort of esoteric jock strap contraption but they are in fact weirdly excellent socks with, um, no actual feet and little elasticy bands at the top and cut-aways at the calves. They were made by Alexander Wang, whose wonderful clothing I did not buy on sale at Barney's today because guess what? Half price super fucking expensive is still expensive. As I was trolling the internet looking for images of the silk striped skorty-shorts with the droopy pockets Giselle was riding a horse in in a recent issue of Vogue, or the crazy deconstructed army jacket with the wacky flannel sort of tails that a really cute girl with a bigger budget than I was surely going to walk out of Barney's with, it looked so awesome on her, or some other image of something I didn't get, what I found were these amazing socks, perhaps the least expensive Alexander Wang item I have ever seen, $55 on his web site (under specials). And yes, $55 may be pricey for socks, but for Alexander Wang it's like the man is just giving them to you and it would be rude of you to turn them away. Right? Right? Anyway, the jock-strappy vibe is not a figment of my imagination, this collection contained lots of overtly footbally pieces, like this linebacker dress spied on the sale rack today, and the clutch that looks like a run-over football and was, like all his excellent, leathery purses, not on sale at all. It's weird to like fashion inspired by football because I hate, like really hate, football. I just leave my body entirely when forced to observe anything sporting (excepting, of course, faggy sports like figure skating or anything with a good costume. I also enjoy a good luge.), so I guess it would be sort of poseurish to wear such items, but then being against, like, war is not enough to kill my attraction to many military-inspired pieces, including an army-ish miniskirt I found for $19 on the sale rack at Urban Outfitters a couple weeks ago. Like sexual fantasy, fashion stakes its claim on you in your subterranean places, overriding good sense, politics, rational thought, morality, ethics, reality, whathaveyou. It's a wordless pulse that hangs out where imagination leaches creepy dreams and stubborn desires, where brain chemistry gets dripped from beakers and hormones surge and stop. Nothing else explains the irrational need for something you, um, don't actually need, ever. Or the time a pair of spectator pumps tried on while in the throes of intense PMS got me high, I mean it, or how I have been moved to tears by any number of intelligently designed or dramatically presented pieces of clothing. This shit is physical. As a person whose whirring mind occasionally feels like a gun pointed in on itself, I appreciate the visceral hold fashion has on my psyche. It doesn't make sense because it doesn't have to. You don't need to use language to behold it unless you want to. Once, when I was newly sober and a wreck all the time, just very raw, I went to the art museum and looked at a Rothko painting, a patch of orange and a patch of blue, and I stared at the orange until the color throbbed in my head and I felt a sun rise in my solar plexus, I swear. I walked over to read the little plaque about the piece and learned that the artist had intended to induce a spiritual experience in the viewer. It worked! And fashion works like that, too, or it can, as it is art as well, don't forget. Okay, but anyway, don't you want to see what those jock strap socks look like on? 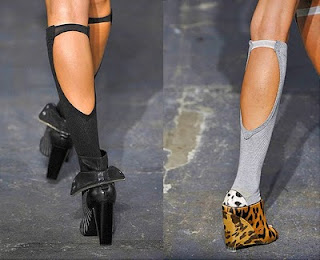 P.S. Those black shoes are maybe my favorite shoes in the world right now, too.
by Michelle Tea at 5:06 PM