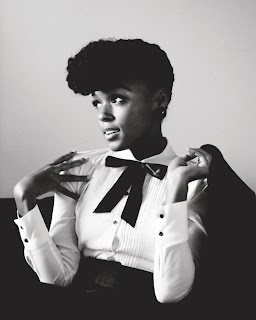 Janelle Monáe, for those of you who don't know, is the latest and greatest of the Bad Boy/Wondaland Arts Society lineup. She is also my latest and greatest style obsession. Her new album, The ArchAndroid is an epic, EPIC concept album featuring Monáe as an unbelievably well-dressed android bent on saving people from mind and soul oppression. It's a tale told to bolster the hearts of all who have not, encouraging them to stand against those who have and who would take (HELLO--amazing in and of itself). For the benefit of everyone, I'll leave any further music reviewing to the fine-tooth combs of professional critics.
I love Monáe's fresh approach to genre-bending, but more than that, I am CRUSHING HARD on her fresh approach to feminine fashion gender-bending. I thought for this my debut blog post, I'd feature her in all of her bow-tie, saddle shoe glory--James Brown meets Marlene Dietrich, 2010. As a former tomboy turned vaguely-andro-French-girl-from-the-60s-yachting-maybe-I'm-secretly-judging-you woman, Monáe's soft shoe-ing, tux-wearing, pompadour-sporting confidence is a dream come true. It's bad, people. I spend hours scouring the farthest reaches of the Internet for interviews, videos--live and studio produced--and magazine images. I'm a 31 year old tween. So be it.
But what's not to love? There are so few examples of feminine fashion that manage to embrace an intelligent, non-sexualized, look you in the eye sort of I'm-dancing-your-way-move-or-dance-along attitude. I'm tired of looking for outfit ideas and getting piles of sundresses, gladiator sandals (yes, I know that's not what's hot this season), and tips on how to dress for various boyfriends that I don't have. I generalize, but you get the gist.
Monáe's Tightrope, features a heroine that struts, snaps, and slides through every frame like she built the world in six days. Backed by a co-ed tux-clad dance troupe, the video is completely lacking in any gendered hierarchies or sexual titillation.
Woot. Woot, indeed.

Her style is full makeup, sleek lines, Thom Browne-inspired suits and Sci-Fi freedom fighting. She traveled the world, drew from her own dreams and pilfered (in the best possible way) every musical genre she could find to make The ArchAndroid. The result is an album that smacks of creative dynamism, intellectual forward thinking and fun. Beyond that, it makes you want to stand up and save the world.
It pretty much sums up one of my favorite things: Shenanarchy. Women who display a sick stunner style that fiddles with the typical puzzle pieces of fashion. Janelle Monáe IS style shenanigans and subtle fashion Ánarchy.
by Michael [von] Braithwaite at 1:37 PM