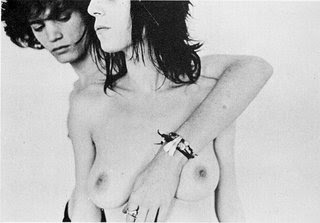 You know your look comes from the heart when you can look this stylish naked.

I'm reading Just Kids, Patti Smith's memoir about her relationship with Robert Mapplethorpe, who she met by fated chance on her first day in New York City, carrying a plaid suitcase, no money, no home, no job, hoping to crash with friends who'd actually moved and Robert was the guy down the hall, lounging dreamily in his room, who helped her find her friends' new apartment. " . . . he rose in one motion, put on his huaraches and white t-shirt, and beckoned me to follow him." The book, which you surely already have heard is majestically good, is also full of style detail - Patti's rain coat, worn in the heat of July and transmitting a 'La Boheme' kinship to fellow penniless, park-sleeping seekers; Patti's beatnik sandals and 'ragged scarves', Robert's sheepskin vest and love beads. The book is entirely romantic, mainly because Patti Smith is a romantic, and her prose is romantic, and she's writing about a romance with a kindred romantic spirit, and the romance infuses even the clothing and jewelry of their moment, transforming simple objects into spiritual talismans, transmitters of destiny. Patti gets a job at Brentano's bookstore and Robert, who magically works at a different branch, comes in to purchase a Persian necklace she had become obsessed with.

'It was made of two enameled metal plaques bound together with heavy black and silver threads, like a very old and exotic scapular, It cost eighteen dollars, which seemed like a lot of money. When things were quiet I would take it out of the case and trace the calligraphy etched upon its violet surface, and dream up tales of its origins.'

Finally finding a home together, he gives Patti the necklace on their first night, wrapped in violet tissue and tied with satin ribbon. 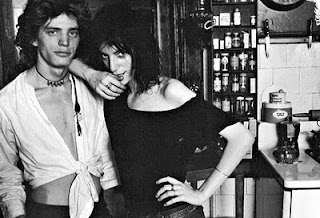 For his 21st birthday Patti bought Robert a silver bracelet she'd found at a pawnshop, engraving Robert Patti blue star onto it. A reference to Venus, ' . . . the shepherd's star and the star of love. Robert called it our blue star.' The pair, too broke to do much but wander around New York City, would take nighttime walks, gazing up at their planet and the moon and the stars. Dreamy. 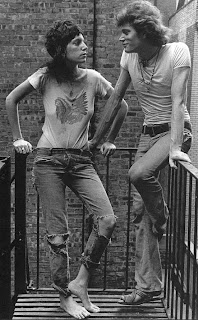 Patti's androgynous style is soul-deep, revealing itself in childhood when she dreamed of wearing coonskin caps and being Davy Crockett, furiously declaring that she was not a girl but Peter Pan when her mom tried to make her start wearing shirts in the summer. Her clothes in the photos here are surely a result of poverty as well as personal style, but worshiping as she did vagabond poets like Rimbaud, Patti wore her tatters with deliberate cool. Look at the perfect rolled cuffs of her jeans with their blown-out knees, the weird way she's tucking her too-small shirt into the waist, her mullet-y hairdo. 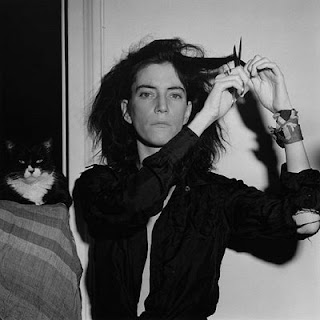 I love everything about this photo - how silky her shirt looks, it's unbuttoned-ness, the hole in the elbow, the scraps around her wrist, her wild hair and the wilder look in her eye like she's daring you to dare her to cut it. Not that she would give a fuck what you thought, anyway. As she told the New York Times Style section, "My style says, 'look at me, don't look at me.' It's 'I don't care what you think.' 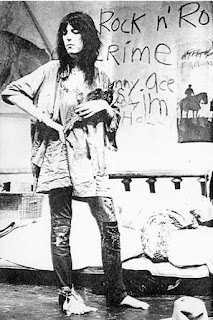 I love her jeans here, too - what, does she have a rag tied around her ankle? Why have I not thought to tie a rag around the ankle of my jeans? This drape-y, tunic-y thing is Rick Owens cool, but like the rest of her tatters it's no doubt the result of thrift store menswear not fitting her scrawny body. And it looks awesome, the way ill-fitting menswear can look on a female, like of course you are not even trying, like you are following the sartorial cues of some incredible, inaccessible rock 'n' roll cult. 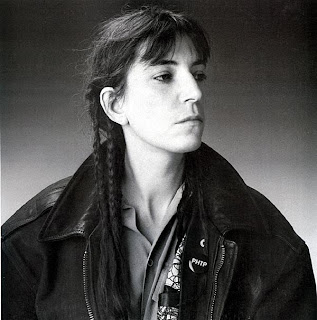 Patti in braids! And more men's clothes that don't really fit her. The thing is, she looks sexy and so essentially rock 'n' roll, but also classic, like she created her own new classic way to dress, which she has. And dignified all at the same time, noble, like Joan of Arc, who she'd pledged herself to before taking off to meet her NYC destiny. There is also something of the Vietnam war protester in this one, a reference I like to draw on when feeling bad about army looks, how 60s protesters were the ones who brought army jackets from the war to the streets. 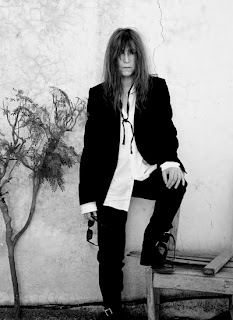 Later, older, with money and fame and success her style remains the same, the tatters and the oversized-ness a clear style decision. She has famously said that she wears only 'vintage and Ann Demeulemeester,' the amazing, moody Belgian designer who calls Patti her best friend and soul mate. Oh wait, I do love this one picture of her in a Christian Dior gown - 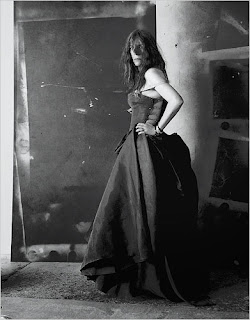 You'd think maybe Patti Smith would look absurd in a ball gown, but her sharpness and dignity synch up with the severity and drama of this one, and clearly she can wear whatever the hell she wants, anyway.

Ann Demeulemeester based her 2006 collection on Patti Smith' iconic look, sending cute boys down the runway in some sort of rocker Victor-Victoria aesthetic tangle: boys dressing like a girl who was dressing like a boy. Or whatever. 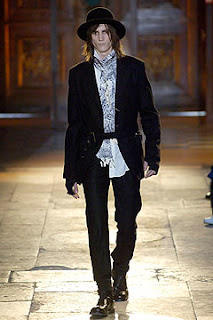 I like the whole sweet underlying narrative of this, that of Patti Smith as a yearning young person, utterly inspired and consumed by this longing to live the life of an artist, dressing to emulate Rimbaud and Bob Dylan, carrying on a conversation with the style expressions of other artists, and years later another artist, Demeulemeester, inspired by Patti Smith's art and life and style conceives of an entire collection around the artist, inadvertently pulling in all these other dormant influences. You can see Bob Dylan via Patti Smith in the guy above, and Arthur Rimbaud as well. Of course now the look costs, oh man I guess I don't know for sure but I would guess that entire outfit is like $10,000. But we know from earlier photos that you can look just as hot (hotter) for literally nothing, if you go picking your clothes up off the street like Patti did. 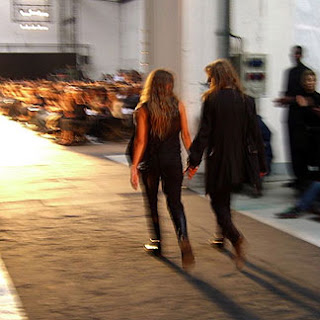 Ann and Patti walking the runway at the close of the 2006 show. Like Patti Smith, Ann Demeulemeester is aging in a ruggedly handsome way women are generally discouraged from aging, all wild hair and wrinkles and her own mannish designs, smoking cigarettes and whatnot. "I don't have the problem that a lot of other people have: that's it's awful to grow old. We all get older. I'm happy to grow older," she told WWD. (In 2009 she joined designers Etro and Yohji Yamamoto in sending senior citizens down the runway.) Other musicians the designer loves include Tom Verlaine, Lou Reed, Nick Cave, Nico and PJ Harvey; for her Spring/Summer 2010 womens' line she sent models down the catwalk to a Bruce Springsteen cover of a Suicide song. So, in addition to wanting her clothes, I would also like the woman to make me a mix CD. Here's a look from that show: 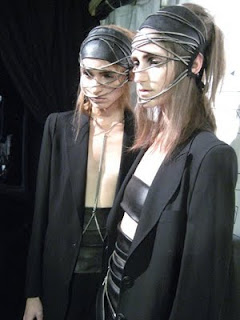 What up, zipperhead! She sent the men down the runway wearing those same headbands.

Let's end with some photos of Patti Smith, now about 64 years old, looking fucking awesome. I've got to get back to Just Kids, which I have spent most of the day reading, noting that today is Memorial Day, Joan of Arc's feast day and the day, in 1967, that both Patti Smith and Robert Mapplethorpe, on the verge of meeting one another, pledged their lives to art, synching themselves up to their incredible destinies. 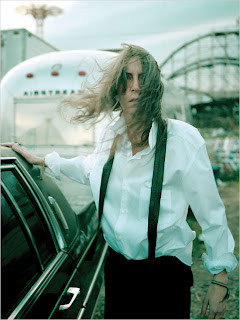