A Ghost in the Closet 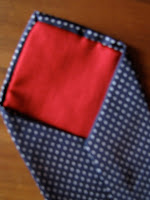 My Grandfather was the most fashionable man I have ever known. He was a british man who worked in the fashion industry. At the time of his death he was working for Brooks Brothers. He traveled often and to many countries looking for fabrics. We called him Pop-pop. Every Christmas he took my sister and I into New York for lunch and a Broadway show. Many times making us walk the long New York blocks in the blistering cold to restaurants like, Top of the 6's and Sardi's. If the restaurant did not serve hamburgers he would have called ahead to make sure they were prepared to do so. If they tried to seat us near the kitchen or a bathroom all hell would break loose. So not only did I learn how to dress well from him but also how to break bread properly, and that sitting near bathrooms and kitchens is not cool. On workdays he wore a suit with his hair slicked back. On weekends I woke to him in the den listening to Mile's Davis wearing khaki's, a pastel striped oxford, a bow-tie and loafers, his hair parted to the side and reading the paper. I remember even his beach towel being enviable and always matching his swim trunks. Though he died when I was only 12 I have been lucky enough to get my graciously grubby hands on some of his goods. Here are a few of my favorite things which were once his things. 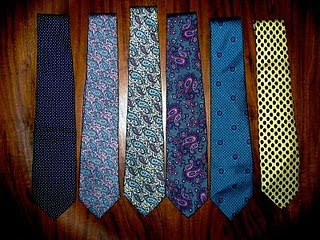 Silk ties I recieved via my Mother who either stole them from my Grandmother or recieved them from her for my step-father. I have a still standing obsession with paisley because of Pop-Pop. These include, Christian Dior, Stanley Blacker, Brooks Brothers and Lord's. 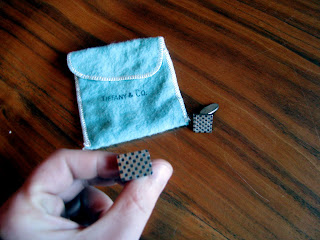 Silver checkered cuff links given to me by my Grandmother who's own fashion should not be overlooked. She gave them to me in the Tiffany pouch shown, however, they are stamped Georg Jensen. It sure helps me feel fancy to pull them out of the Tiffany pouch on special occasions. Though checkered patterns have been fully played out and seem fitting only for people 16 years or younger these days I can't help but think Pop-Pop must have been ahead of his time with these. I myself will break the checked rule and wear these myself as there is something iconic about them. 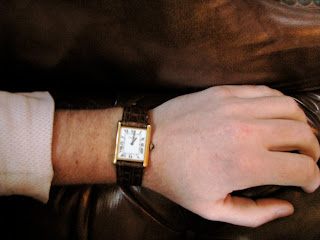 Cartier watch. My mother took me to the post office where she pulled this out of a safety deposit box and placed it in my hand. "Don't tell anyone." she said. I felt like James Bond. It has a saphire windy thing and is as classic as anything could get. I like it best worn casually with jeans. Though the band is old and cracked I never replace it because it was the one Pop-Pop used and when i sweat it brings out his smell. Is that gross? 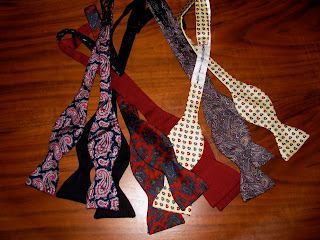 Collection of silk bow ties. These include, Lord's, Aquascutum(Check out what these guys are up to now, especially if you're in the market for a trench. Also, Aquascutum Limited), Brooks Brothers, and Racquet Club. 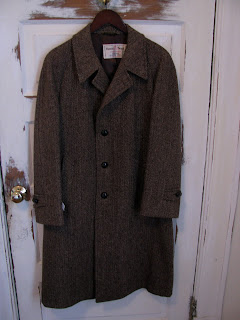 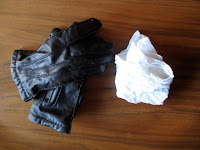 Harris Tweed coat. My Grandmother gave my mother a bag to take to Goodwill and she found this inside. She mailed it to me knowing I would prefer it in my closet. It is unfortunately too big but I plan on taking it to a tailor. I'm thinking of shortening it and adding a belt. It is very bell shaped at present, reminds me of Sherlock which could be bad but could also be good. Upon receiving this I promptly tried it on and put my hands in the pockets. Those gloves(cashmere lined from Aris) were in one pocket still curved to Pop-Pop's hands. Like he had removed them from his hands earlier that afternoon. The other pocket had that wrinkled hanky in it. And this I know is gross, it's got his boogers still on it. I got this a couple years ago and have still not been able to wash the hanky and leave it in the coat pocket. I mean, what if some supposed long lost relative showed up trying to take possession of the coat? Not today brother, I've got DNA.

I absolutely love wearing the clothes of dead people. And not just any old dead people clothes thrifted, though that can have it's own charm. I'm talking your Fathers or Uncles or Mothers or whoever. It's like taking them out with you for the day or evening. Often times I'm sure they do join you when you wear their stuff. Why not? Be careful of dead creeps clothes though. Like that thrifted Woolrich jacket you always feel like shooting people when your wearing? First sage it, then take it to the dry cleaner. You will be whistling while you wear it in no time.
by Leo Plass at 1:00 PM