A Few of Their Favorite Things. 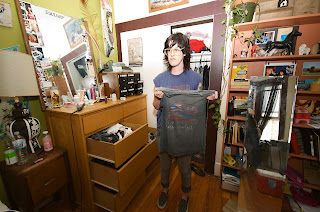 RHIANNON ARGO A somewhat boring t-shirt I stole from (an ex). I've worn it so much it's starting to get holes in it. It's the perfect worn-out t-shirt that fits really cute. It's a boys' t-shirt but it fits really sexy. It's Pink Floyd The Wall. It's one of those break-up casualties - for her it was a casualty. Sometimes I wear it for like a week straight. Is that gross? This is the thing that if I lost it I'd probably cry. 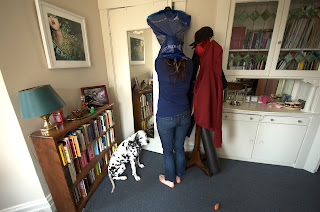 ELIZABETH PICKENS I haven't seen it since - when did I even get this? It was so long ago, maybe in the fall? I remember it's black. And I calculated how much I bought it for - 35% of the original price. And this is precisely why I won't unwrap it. There will be dog hair all over it. This is my descent into madness. I like to buy nice products and never use them. It's a black Alexander McQueen dress that has a deep v-neck and I'm kind of a prude. It's a very plunging neckline. There is breast exposure. It's like a sexy business dress of the future. I can't eat dairy for like a week before I wear it. I haven't worn it. Wearing this, I would get so much attention, and I'm more comfortable behind the scenes. This dress was originally $1,740. This dress cost 1/30th of my house in Missouri. There's already dog hair on it! 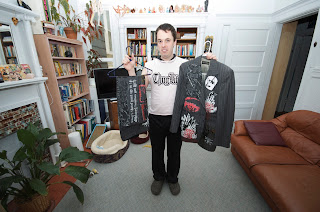 KIRK READ This is a suit that was screen-printed by Sahar Koury. I got nominated for a Lammie in 2001. I was going to the ceremony and I wanted something to wear. This was a way of bringing San Francisco aesthetics with me to a very New York, very literary, very suit-and-tie environment. It was a way of kind of bringing San Francisco dyke culture into that New York room. Without sounding too corny - which I guess I risk a lot - it was a way of sort of literally wearing on my sleeve this appreciation and love for women and transpeople and artists. Saying with my clothes 'This is my people, this is where I come from, I'm not from this uptight Ivy League, gay white male culture.' I was asked by two people, 'Are you on drugs?' She used some images of a wedding cake, the top of a wedding cake. She used a wolf head because of (boyfriend's) last name. She used text from a Mission weekly hotel that burned, and many people think it was the owners that burned it. She used the words 'Welcome Home' because it was the diner me and (boyfriend) first met. Under the flap she used the words 'tight butts drive me nuts.' She did the Lone Ranger. And an eyeball on the left buttcheek. I guess that was like, gay guys have eyes on the back of their butts. Yeah, I just love her. I didn't pay her nearly enough to make this, but it felt good to pay an artist something. I since have paid her to make clothes for shows. It feels really good to be able to pay artists. I think one of these images is from her father. She made a shirt to go with this. And a tie. 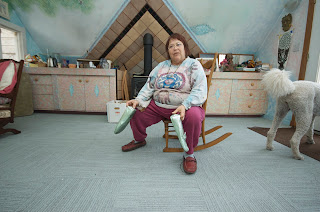 ROSE MAY DANCE These are my shoes. My mother always said, 'If you want to go shopping the easiest thing to go shopping for are shoes, because you can sit down and you don't have to take anything off.' I was walking along and I saw a shoe sale. And so I walked in. The place smelled so good. It was all the leather. These are leather. Look at them - they are leather, genuine cow leather from Italy, where all good shoes come from. They were the only ones for $27 in my size. I have worn them only a little bit outside. I wear them to a party. I wore them quite a bit around the holiday season and then broke this clasp. But I had wire in my father's tool box and I mended them. You can see how these shoes jazz up my outfit. 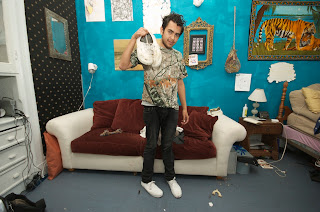 GERARDO GONZALEZ I only have one pair of shoes that I always buy. I have to buy them every two months because they go from white and perfect to . . . They're just basic white Vans. I just think I have issues with committing to other shoes. I'll buy other shoes, but when I put them on they don't feel right. It's the whiteness. Which is stupid because I go through so many. 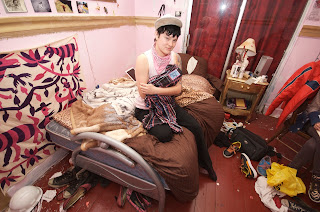 CYD NOVA This is a shirt that my partner made for me. It came from when I came out to him, like the first month I was IDing as male. I was going through this 'passing' thing and feeling like all boys' clothes are ugly and if I am going to look male I have to wear ugly clothes. People said I have to wear plaid shirts but I didn't want to look like a frat boy. So he made this. It says 'non-frat' on the front and 'faggot' on the back. It says 'Daddy's boy' on the tag. It's very cute. When I went back to visit him in Australia he said, "I made you a present." And I said, Oh, that's the nicest thing anyone's ever made for me. 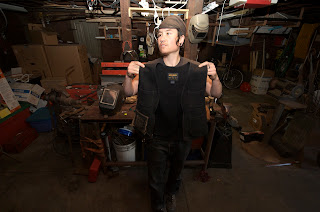 BYRD PAPPAS My vest was given to me buy the person who was to be my girlfriend ad life partner, before we were life partners. It's kind of a sweet gender story. My binders were killing me. I just wanted a vest. One day I was at her house, and it was cold in the city. I was visiting from Oakland and I didn't have enough layers. I put it on and it was like a magic cloak. It fit me perfectly. The next day she gave it to me. From then on it was my second skin. I even wear it all summer. I think I got really excited about the vest because they're the perfect thing when you want a break from binding. It can allow for some androgynous coverage. If you can't afford surgery and you want to be comfortable. I'd be like, you're sure you can't tell? You can't tell? And my girlfriend would tell me, 'Stop stressing, you can't tell.' 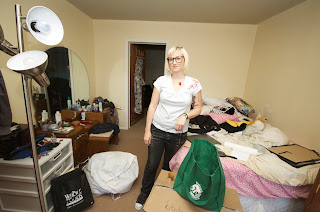 KATIE KAAPCKE I don't actually need glasses but I feel like they fit my persona. These ones are gigantic. I had a lot of friends who wore glasses without the lenses and then I found a pair online that were my dream glasses. I loved them. They just go with everything. I feel naked now when I don't wear my fake glasses. People think it's really vain that I wear fake glasses. Not that glasses equal dork, but I do equate that. I just have this want to wear glasses.

ALL PHOTOS AMOS MAC. INTERVIEWS BY MICHELLE TEA.
all subjects photographed in their home, talking about their favorite thing to wear
by Michelle Tea at 9:48 PM